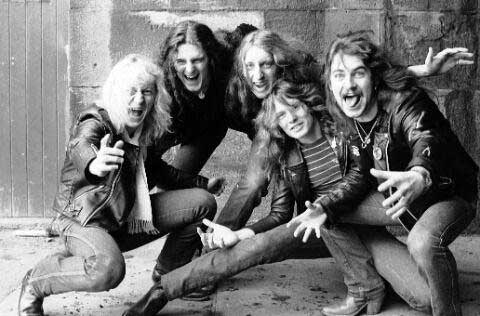 The band, formed in 1979 by guitarist Robb Weir, quickly established itself after playing relentless live shows, building a strong fan base.
Their first single sold 15,000 copies in a month before the band signed to MCA.
Tygers of Pan Tang’s music moved forward, from the classic Wildcats album to the critically acclaimed The Cage, and the bandâ€™s significant progression and movement in styles are still considered ahead of its time.
The current line up has been together since 2004 and classic Rock is certainly the agenda, the experimental direction has been dropped and the signature tunes returned. The set revolves around the first four albums, plus a slice of new material.
In November 2007 the band released a five track EP Back & Beyond (mastered
& mixed by Ben Matthews of Thunder). The EP gave the fans a taste of
things to come from the new album Animal Instinct, which has a provisional
release date of March 2008.
myspace.com/tygersofpantanguk
springandairbrakebelfast.com
TYGERS OF PAN TANG
Plus Support Whitefire / Inch High
THIS FRIDAY 22ND FEBRUARY
SPRING & AIRBRAKE
TICKETS: Â£11
DOORS: 9pm