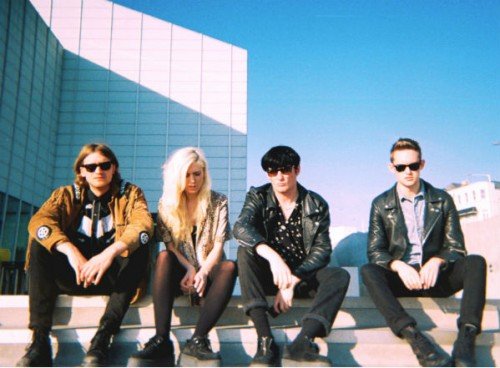 Watch the new video for Two Wounded Birds’ beautiful piece of perfect pop ,‘To Be Young’, released on Jacob Graham of The Drums’ label, Holiday Friends Recording Co., on August 5th.
The video was directed by Dom Bridges and filmed in the beautiful 100 year-old Carlton Cinema in Westgate-on-Sea near the band’s hometown of Margate.

Guitarist Joe Stevens says : “We made the video in the Carlton Cinema in Westgate On Sea, It’s one of the few places that uses analogue projection. The seats are velvet and the whole place has the feeling of another time.

The cartoons are also from a different time. One of them is a journey through space and all the planets have the faces of Gods on them, they look like marbles.

In the video at one point you can see cows leaning out of the window of a space shuttle and dancing with each other.

In another two poor kids in rags go to sleep and wake up in paradise together. Reality is something you don’t consider when you’re young, things like this make total sense and the world’s a better place for it.“
Two Wounded Birds debut album is out now on Holiday Friends Recording Co.
facebook.co.uk/twowoundedbirds
twitter.com/twowoundedbirds