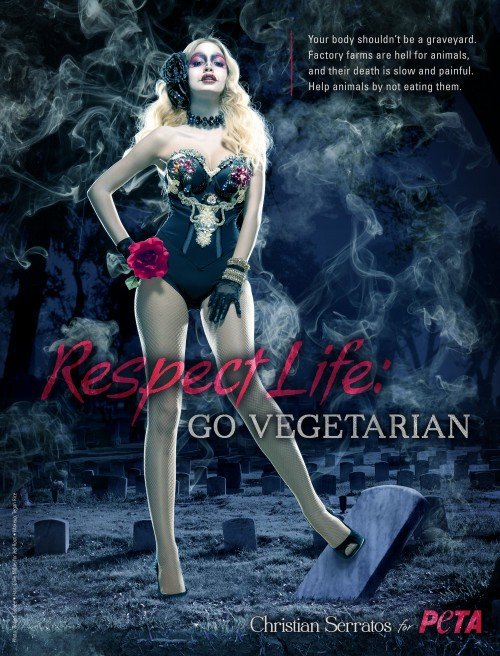 Wearing a corset and calaveras-inspired makeup and standing in a fog-filled graveyard, Twilight star Christian Serratos – known to fans of the series as Bella’s friend Angela – is featured in a new ad for PETA UK inspired by Día de los Muertos (the Day of the Dead) that reads, “Respect Life. Go Vegetarian”. “The ad, which was shot by top celebrity photographer Robert Sebree, goes on to say, “Factory farms are hell for animals, and their death is slow and painful. Help animals by not eating them”.

“When I stopped eating meat, I noticed that it was easier for me to focus, and I was really proud of myself for being green also. … I had a plethora of reasons for going vegetarian”, says Serratos, who has worked with PETA US since she was 14 years old.

“I was eating meat and didn’t know how it affected my health …. I just felt better and brighter and lighter, and I had more energy …. It was a big deal to me, being an animal lover, that I realised what I was eating, and I didn’t separate myself from, say, my animals, my pets.”
peta.org.uk/