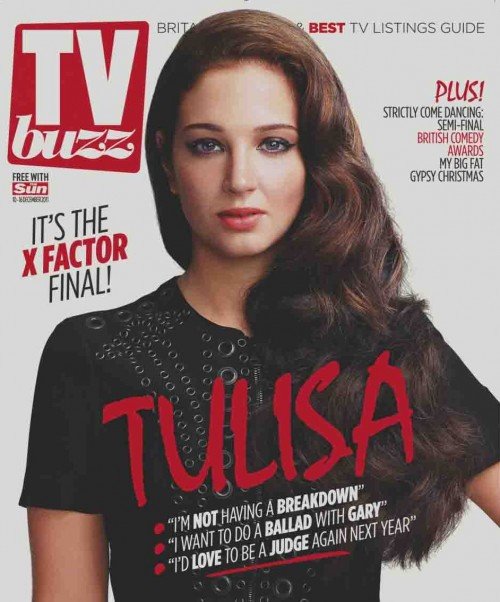 It’s the finale of the x factor this weekend and the Sun TV buzz gets to know X Factor judge Tulisa. It’s been an amazing ride for the self-described “most competitive judge”.

Last year at this time, whilst watching The X Factor, she thought “I could do that.” Now here she is taking one of her acts to Wembley!

Tulisa has certainly had her ups and downs in the press, she told TV buzz, “Apparently I’m having a breakdown” which she explained is a joke! “The amount of people that have come out of the woodwork selling stories, I can’t stand it, horrible people that used to be part of my life and talk to the press like they know me, but I don’t know them anymore.”

Tulisa also is amazed by the number of stories published about here that aren’t true.

She says, “I was in Tesco and saw this headline saying: ‘Tulisa can’t take it anymore!’ But here I am strolling around the supermarket.” She also reveals, “Another story said my boyfriend was going to break up with me before Christmas. It’s all made up.”

Is The X Factor on the cards for Tulisa next year? She replies, “I’d love to do X Factor next year, though I wonder if I’d get on with my contestants as well. It might have been first time lucky.”

Tulisa revealed to TV buzz the truth behind the drama with her and Kelly, “I never had a problem with Kelly in the first place. It was simply about a comment I made which caused a bit of tension. Now that’s gone.”

Tulisa openly admitted she does not regret calling Misha B a bully: “For me it’s about what happened behind the scenes as well as on stage. I wasn’t lying; it was affecting one of my acts and the week something was said it stopped.”

Tulisa was always open to helping the other contestants: “Kitty sometimes needed a bit of girl advice, so she used to come and knock on my door and I’d have a chat with her.” Tulisa was shocked that The Risk went so early in the competition; she was honest and said, “I should have put Ashford in the group from the start. I hold my hands up for that one.”

Tulisa may have had a few disagreements with Gary Barlow, but she told TV buzz, “I’d love to do a great ballad with Gary, but he’s a mysterious character, I never know what he’s thinking.” She’s even getting him a Christmas present: “I’ll get him a Drake album! Let’s see how many songs he knows on that!”

Tulisa admitted in the past that the money did appeal to her and she revealed, “I don’t have many friends, but if I eat out with them, I do feel obliged to pick up the bill.”

But does she like to watch Strictly with her girlfriends? “Strictly’s not my cup of tea, The X Factor is still the biggest show on telly.” Team X Factor then!

Read more in this weekends’ TV Buzz Magazine from The SUN
thesun.co.uk/tvbuzzmag/
facebook.com/TVbuzzmag