I REVIEWED these guys back in October last year and seen them play again about a week or two ago and I have to say I don’t love them any less ! 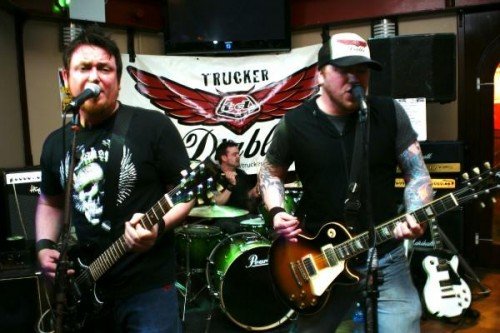 This band oozes testosterone and literally fire on all cylinders.

They have a fantastic way of getting the crowd riled up into frenzy and from a single woman’s perspective that can only be a good thing ? Can’t it ?

Their sound is heavy rock with a real american feel to it along with a classic vibe that is unashamedly populist.

Riffs and drums are strong and forceful with a confidence only a band who had been together for a long time could emanate.

Vocals are sexy, heavy and crisp clear; tuneful and yet screamy vocals all in the right places give Trucker a unique sound in my opinion.

If you can imagine a thunder storm on stage followed by an rapturous chaos – well this isn’t far off the Trucker sound.

I think it’s fair to say these guys are gonna be rocking for a long, long time and hopefully it won’t be long before I’m reviewing them at The Ulster Hall or Odyssey.

To describe them in three short words to your friends they are hot, strong and fantastic.
www.myspace.com/truckerdiablo
By Tina Calder