After almost 30 years together, one of rock’s most famous couple isn’t afraid to spice things up. 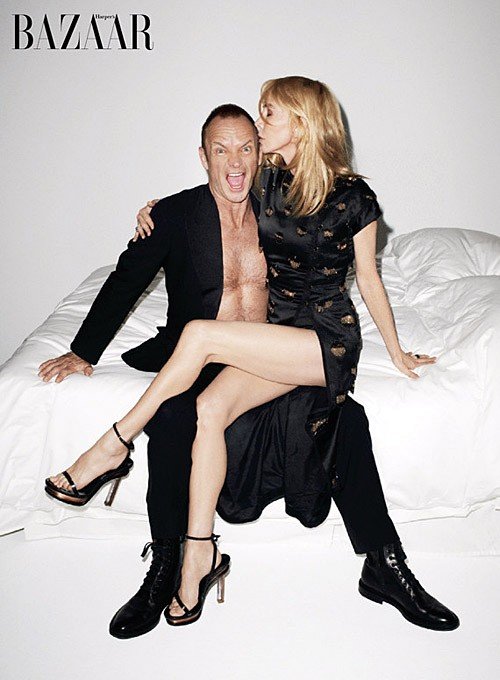 Sting and Trudie Styler are featured in the February issue of Harper’s Bazaar, posing in several amorous positions and talking about how they keep their love alive for so many years.

That’s the secret to romance, they say: a sense of occasion. “We treat every day as it comes,” Sting explains.

“Relationships aren’t easy, and I don’t think they’re particularly natural, but we’re lucky because we actually like each other. 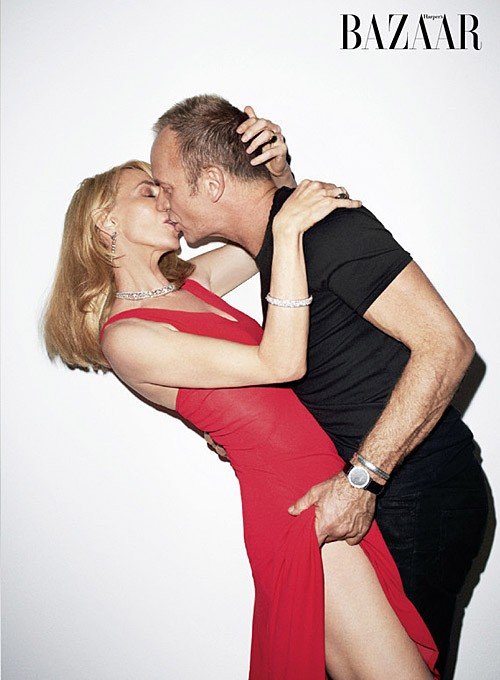 We love each other–that’s a given–but Trudie lights my world up when she comes into a room. I don’t take her for granted.” How so? “Well,” he pauses, while Styler pops on his Lanvin fedora, “I could lose her. He’d have to be very rich and very handsome, but …”

While Sting and Styler have been together a record amount of time in celebrity years–they were married in 1992–weeks can go by when they don’t see each other.

“It’s important to have frank discussions about what the other wants,” Styler says. “To be in a relationship that is like a little lifetime, that’s a challenge.”

“We don’t get bored,” Styler says. “Being apart juices the relationship,”

Sting explains. “When we see each other, it’s romance. I don’t think pedestrian sex is very interesting. There’s a playfulness we have; I like the theater of sex. I like to look good. I like her to dress up. I like to dress her up.” What’s the most romantic thing they’ve ever done for each other? “Romantic? We like tawdry.”

Onstage and off, Sting and Styler give new meaning to hosts with the most. Every summer, at their estate and vineyard in Tuscany, Il Palagio, they host a retreat for writers, scientists, and thinkers of all flavors.

“It was my idea, because I’m a very curious person,” Styler explains. Last year, Bob Geldof, environmentalist Zac Goldsmith, author Khaled Hosseini, Napster cofounder Sean Parker (“He was reading the Social Network script, saying, ‘They don’t make me sound very nice'”), and others gathered to make presentations and throw around ideas. “Then,” Styler laughs, “you can have as much wine as you want.”

Both appreciate the art of living. “We’re epicureans; we believe in the good life,” Sting says, polishing off his gin. Styler adds, “Eating’s pretty major; we have feasts at our house.” Which, of course, prompts a question: What is their greatest indulgence?
read more in www.harpersbazaar.com
By LAURA BROWN
Photos by TERRY RICHARDSON