For the occasion Lady Gaga has posted a picture of herself kissing Tony Bennet on Twitter. 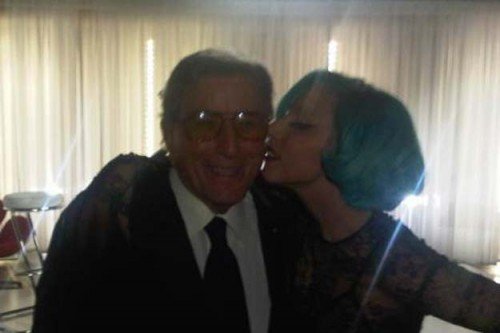 She wrote: “Hangin’ out with my buddy Tony having a whiskey. Feel like such a tramp.”

The final 2 sessions completed a celebrated list of artists to record with Bennett over the past 4 months, including the last ever studio recording with Amy Winehouse and recordings with amongst others: Michael Bublé ; k.d. Lang; Sheryl Crow; Mariah Carey; Andrea Bocelli; Queen Latifah and Willie Nelson. Lady Gaga joined Tony for a rendition of the Richard Rodgers song, “The Lady Is A Tramp” and Bennett and Franklin collaborated on the Alan and Marilyn Bergman classic, “How Do You Keep The Music Playing.”

Both tracks were recorded live in the studio in New York in the past week in keeping with all the tracks, which saw Bennett travel around the world to record in person with each artist. His travels took him from Italy to the home of Andrea Bocelli, New Orleans and the legendary Abbey Road studios in London to New York and LA.

DUETS II is the follow-up to the multi-platinum CD, DUETS, released in conjunction with Tony’s 80th birthday in 2006, which won him three Grammy Awards and was his best ever selling CD.

Phil Ramone takes the helm once again as producer, following up on his success with the Bennett’s first DUETS album. The album will be released in the UK on October 3rd to coincide with a special one-off performance at The Palladium Theatre in London.

A special invitation-only dinner will take place after the concert and will be hosted by Alec Baldwin with a special performance by long-standing friend, Sir Elton John.

The event will honor Bennett’s Exploring the Arts organization which funds and supports arts education in all five boroughs in New York City.

In advance of the event, over $1.5M has already been raised as part of Bennett’s long-standing commitment to arts education in New York City.

Ten years ago with his wife Susan Benedetto, he founded the Frank Sinatra School of the Arts (FSSA), which has since become one of the most well regarded and prestigious high schools in the country. It is located in his hometown of Astoria, Queens.

The recording sessions for “Duets II” have also been filmed by Oscar-winning cinematographer Dion Beebe (“Chicago,” “Memoirs Of A Geisha”, “Collateral”) and will be released as a documentary in conjunction with the album, providing an in-depth, personal, behind-the-scenes study of Bennett’s unique life story and artistic way of working.

Speaking of recording with Tony:
Phil Ramone:
“ Tony’s artistic generosity was so appreciated by each performer, many of whom said that to record with such a master was a career highlight that they’ll always remember.”

Sheryl Crow:
“ He’s basically an honorary member of my family”

Michael Buble:
“ One of the most important things about being a great singer is that your voice is

Unmistakable when someone hears it. Tony Bennett’s voice.. no-one, even sounds close.”
DUETS II: ARTIST AND SONG ROSTER
ANDREA BOCELLI STRANGER IN PARADISE
MICHAEL BUBLÉ I WANNA BE AROUND
MARIAH CAREY WHEN DO THE BELLS RING FOR ME?
NATALIE COLE WATCH WHAT HAPPENS
SHERYL CROW THE GIRL I LOVE
AMY WINEHOUSE BODY AND SOUL
ARETHA FRANKLIN HOW DO YOU KEEP THE MUSIC PLAYING?
JOSH GROBAN THIS IS ALL I ASK
FAITH HILL THE WAY YOU LOOK TONIGHT
NORAH JONES SPEAK LOW
LADY GAGA THE LADY IS TRAMP
k.d. lang BLUE VELVET
JOHN MAYER ONE FOR MY BABY (AND ONE MORE FOR THE ROAD)
WILLIE NELSON ON THE SUNNY SIDE OF THE STREET
QUEEN LATIFAH WHO CAN I TURN TO?
ALEJANDRO SANZ YESTERDAY I HEARD THE RAIN
CARRIE UNDERWOOD IT HAD TO BE YOU
tonybennett.com