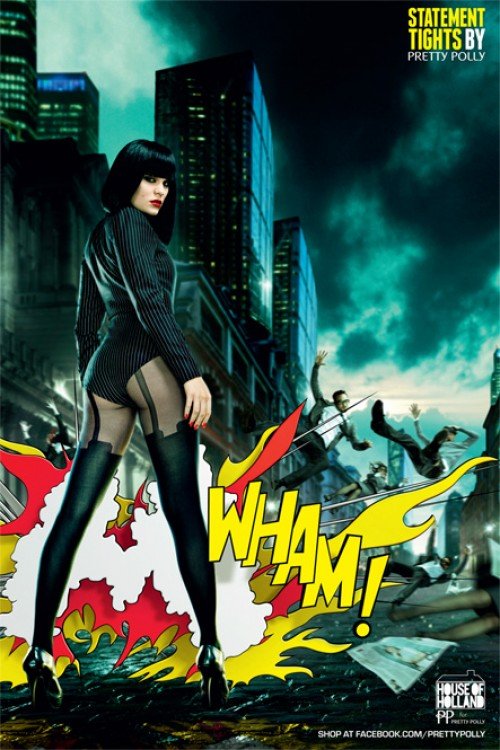 Pretty Polly announced that international singer / songwriter Jessie J as the new star of the House of Holland for Pretty Polly AW11 campaign.

Jessie J is seen as a stylish heroine in a series of comic-strip inspired scenarios showing the power of Pretty Polly statement tights. Bystanders are rendered powerless in the street as Jessie strides out in the newest collection by House of Holland for Pretty Polly.

Having earned herself international super-stardom in the music industry, Jessie J was the natural choice for the groundbreaking fashion campaign for Pretty Polly. “I was the front of the queue for legs”, Jessie comments on her now trademark look.

“Ever since I started out as a singer, tights have been my statement. When you put on a pair of tights, you feel sexy and powerful. I have been wearing House of Holland for Pretty Polly tights for ages, there was a point when I almost hadn’t realised I was wearing them every time I left my house!”

All House of Holland for Pretty Polly tights featured in the campaign are available to buy from the new f-Store at facebook.com/prettypollyw or at the new Pretty Polly Pop Up Shop in Covent Garden Market open from 17th October 2011 until 31st January 2012.