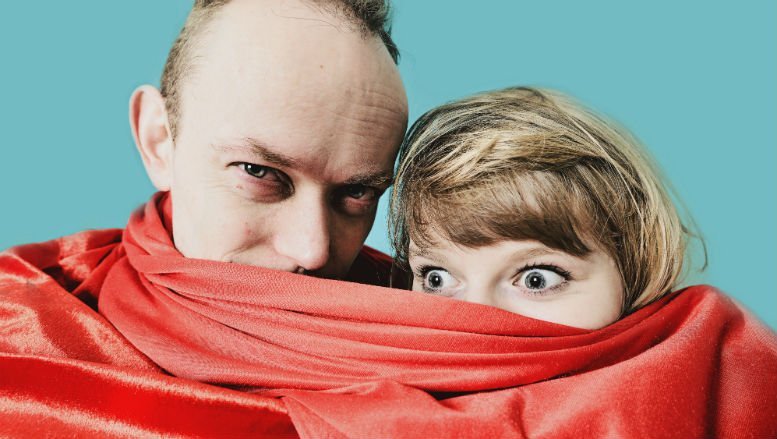 This is a band (Rosie can’t eat biscuits in odd numbers. Max can’t not) who need to be seen live to be truly appreciated. There are no bells and whistles, just two musicians doing what they do and creating something that not only sounds great, but looks amazing too….Here’s the video (directed by Rhodri Thomas) for ‘Narrowman’, the first single from the album.

Hi Totem Terrors how are you?

How would describe yourself musically in three words?

How do you go about the writing process for your songs? Is it done collaboratively or individually?

M: It’s all Rosie. I’m just the eye candy. Nah, seriously it’s 100% collaborative. One of us will have started it off with a riff or something, but then it’s just back and forth until something sticks.

R: Yep, it’s all one big messy collaboration. Max hates it if I call a song ‘my’ song or ‘his’ song because it’s pretty hard to decipher who did what outside of the obviously killer riffs.

’Hard Science’ your album is out on June 29th. What are the theme contained in the record?

M: Apparently alienation, and I only say that retrospectively, having typed out all the lyrics for the album sleeve and realised how bleak they are when taken out of context and without repetition. There are one or two on there about other stuff. Lack of sex, the fragility of life, nihilistic sisters, that kind of thing.

R: Well, speak for yourself mister! It’s definitely shouting about loneliness and frustration, but it’s also quite erratic – anger and vulnerability, or some other deep shit, I don’t know. 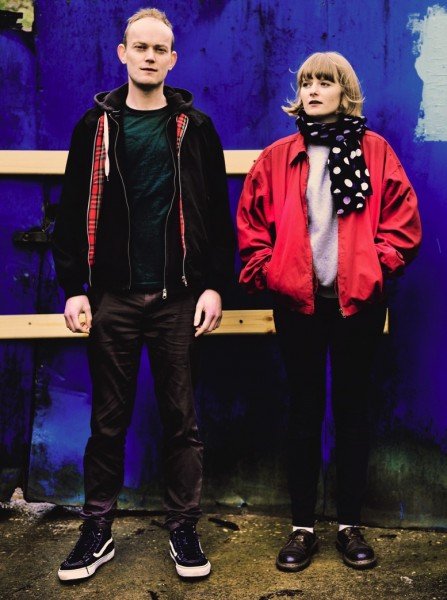 How was the recording process? Where did you record the album?

M: We recorded the first one in a naval reserve base just because we wanted an unfamiliar environment. This time we wimped out a bit and did it with our porta-studio at Music Box in Cardiff, which is a practice room really. They have good microphones and a kettle and you don’t have to do a guitar take while a trainee marine does weights in the next room. Also we did a lot of the vocals in Rosie’s bedroom and at One Mic Wonder studios, which is the extravagant name I give to my 1 bed apartment when the recording kit comes out.

R: Holy shit, not gonna lie, it was a struggle. After the first one we vowed to give ourselves more time with the recording process but ultimately the best thing you can do for yourself and your creative process is give yourself a big fat deadline! It was (almost) always fun, don’t get me wrong, it was just a logistical and financial nightmare. The brutal truth of DIY.

Your artwork for the album was designed by Ghostshrimp of Adventure Time. How did this come about?

M: I was working at Spiller’s records in Cardiff the week the NehruvianDOOM album came out, and Ghostshrimp did the art for that. I thought it looked amazing, so I tracked him down and asked him if he’d do ours, too. The best part of the process is that Ghostshrimp prefers to draw whatever your music inspires him to draw, so there’s more of a connection with the music than with, say, an illustration just done completely removed from anything.

Needless to say, we loved what he came up with for us. Ghostshrimp’s done album covers before, but mostly on the electronica / hip-hop side of the spectrum, so it feels good to bring a little Ghostshrimp into the punk rock world. I also like how, in an abstract and entirely accidental way, the art is almost a surreal re-imagining of Eric Roth and Dave Christensen’s cover for Junkyard by The Birthday Party.

You’ve been compared to the likes of Wire and Liars? Would you say this is representative of your sound and where would you say your sound fits in todays landscape?

M: Wire are a huge influence and I’d be lying if I said otherwise. Liars have that electronic side of their sound, and we approach that because we use a drum machine and have a taste for ‘non-traditional’ guitar and bass sounds, though we’re not really a laptop kinda band and I’ve only heard one of their albums. We’re firmly in the progressive rather than the traditionalist camp. We like to build songs around individual ideas rather than a set formula, and once we’ve done the idea, we move on.

At the same time if your aim is to write pop songs, then there are certain elements which are just inherent to that process, like singable melodies and danceable rhythms and so on. It’s way too easy to make noise for the sake of noise, and I love hooks too much to be very interested by that, but you can still produce pop songs without having to approach traditional instrumentation in a traditional way. I’m not what you’d call a ‘root note player’, and Rosie’s not really a chords-only kinda gal either, y’know?

There’s a lot of interesting music being made electronically these days, and because an electronic sound has no traditional context it means there’s a greater sense of freedom in the creative process. Those sounds can be used in any way the composer sees fit. Well, just because the notes we make are originated with guitars doesn’t mean everything we play has to sound like a guitar, or serve the expected purpose of a guitar. It’s the same principle of freedom from the electronic domain re-applied to good ol’ guitar and bass. Who else has a headache?

R: I think we’re in there somewhere, but I find it weird to think about. I’m a bugger for hearing a new band and wanting to instantly be more like them – I get a bit over-excited, as Max will almost definitely confirm – so I swing from wanting to steal ideas to having absolutely no idea what I’m playing, which are both super fun. I have no idea where we fit in today’s landscape, am I meant to say something definitive to inspire confidence? Hmm…

For those who haven’t seen you play live, what is a Totem Terrors live show like?

M: Two people, two guitars, a drum machine, no messin’. Once in a blue moon one (or both) of us will be ‘on form’ and will enjoy some repartee with the crowd, but most of the time when we talk to the audience it’s really awkward because we’re not there to talk and we’ve usually got nothing to say right at that moment anyway. So we try to keep the gaps between the songs to a minimum and just plough a ten-song set into the crowd before anyone gets out of breath. More than a couple of times people have said we “make a lot of noise for a two-piece”, which I’m kinda proud of, especially because I designed and built a lot of the effects pedals we use. I think we punch above our weight in terms of the noise-per-band-member stakes.

R: They’re always different, but get us in a bad mood or on the back of too little sleep and that’s a fun one.

M: Run The Jewels because I’d like to cross the divide. Or Thee Oh Sees because they are the best live band ever. Or A Place To Bury Strangers so I can talk pedals with Oliver Ackermann.

M: Gigs! And we’ll be putting out a limited edition 7″ in the autumn probably, so look out for that. And then a third record as soon as we can, because we’ve got some new ideas to try.

R: After the second record, we’ve got some shows to do and a sexy 7” coming out near September time, then more shows. Pretty exciting!