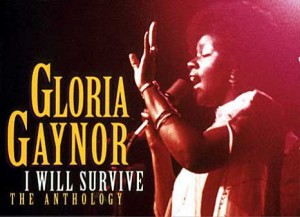 Gloria Gaynorâ€™s â€˜I will surviveâ€™ voted the greatest karaoke song of all time.

Bursting with favourite disco, rock and pop anthems, this list is definitely not for shy and retiring types:The Churchill Insurance list of the greatest karaoke songs of all time:
1. I Will Survive â€“ Gloria Gaynor
Itâ€™s â€˜back, from outer spaceâ€™ and itâ€™s bagged the number one slot as the greatest karaoke tune of all time – Gloria Gaynorâ€™s 1979 number one hit makes for a tonsil-tastic night out at the karaoke bar or night in on the games console

2. Donâ€™t Stop Me Now – Queen
The nation really doesnâ€™t want to stop singing this one now because they are clearly â€˜having a good timeâ€™ whenever this big song begins to play

3. Angels â€“ Robbie Williams
Weâ€™re â€˜loving angels insteadâ€™ â€“ one for the boys to croon to and the girls to swoon over, Robbieâ€™s Angels storms in at number three

4. Bohemian Rhapsody – Queen
Oh mamma mia – itâ€™s been a UK number one hit on two occasions for Queen and slides into the fourth spot as people go potty for operatic rock
5. Iâ€™m Gonna Be (500 miles) â€“ The Proclaimers
Many would walk a thousand miles to this song made famous by Scottish band The Proclaimers; others would prefer to take the microphone and perform it

= Dancing Queen – Abba
â€˜You can dance, you can jive, having the time of your lifeâ€™ to this Abba song, according to Churchillâ€™s poll

8. Is This The Way To Amarillo â€“ Tony Christie
Many karaoke enthusiasts are â€˜dreaming dreamsâ€™ of singing Amarillo when they hit the karaoke booths with friends

9. Sweet Caroline â€“ Neil Diamond
A hit for Neil Diamond, the â€˜good times never seemed so goodâ€™ whenever this song is punched into the karaoke

Matt Owen, spokesperson for Churchill, says:
â€œAn evening of karaoke can bring out the best, as well as the worst, in singing voices – but you can certainly depend on it for being a bit of a laugh. Many of our greatest karaoke tunes are old classics, perfect for a sing-a-long with family and friends.â€
The research also revealed the top karaoke occasions:
1. A night out with friends / family (37 per cent)
2. A friendâ€™s / relativeâ€™s birthday (12 per cent)
3. At home on the games console (12 per cent)
4. On a night out with colleagues / as a team building event (8 per cent)
5. At home on a karaoke machine (6 per cent)