SOME of Northern Ireland’s top artists have donated thousands of pounds worth of paintings to the Rape Crisis & Sexual Abuse Centre.

The paintings are part of an auction celebrating Irish contemporary art, including works from Hector McDonnell, Rita Duffy and Brian Ballard, taking place at Ross’s Auction House next Wednesday (December 5). 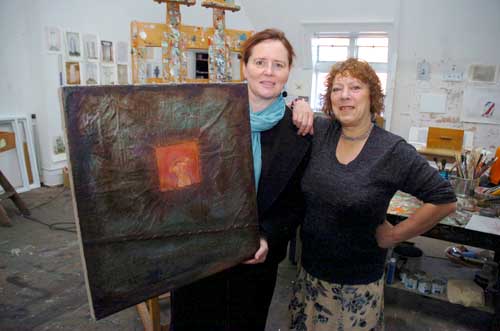 Over 40 artists have donated pieces with 15 being auctioned this week, the remaining donations will be part of a show in April next year.
The auction is a life line for the struggling charity.

Almost two years ago the Rape Crisis Centre – which is the only free, crisis counselling service in Northern Ireland for victims and survivors of rape, child sexual abuse and sexual violence had it’s government funding withdrawn amid controversy.

Since this time the Centre, with only staff of just two and a further three volunteers have been surviving on donations from the general public and small fund-raising events organised by supporters.
Paula Wynburne, voluntary fundraiser for the Rape Crisis Centre, organised an auction 15 years ago to support the Centre and when she heard about their troubles she decided to organise another fundraiser.

She said: “When I heard they were in dire financial straits I volunteered to come back and do some fundraising for them.

“And since it was so long since the last one I thought I’d go back and ask the artists to donate again.

“This auction not only enables people to support the Rape Crisis Centre, they get a work of art, which over time will actually increase in value. It benefits the buyer as well, it’s something they get to enjoy and reap the benefits of.

“A list of the Rape Crisis Centre paintings will be available at Ross’s so people can go down and view them on Tuesday.
“We are also going to be doing an exhibition at the beginning of next year”.

One of Northern Ireland’s most celebrated artists, Rita Duffy is donating a painting from a series on the female psyche.

“We do these things and we hope tomorrow will be a better day. But then again you look at the pace of development in Northern Ireland and if you were a more despairing person, maybe you would despair, we’re very slow at actually fulfilling our needs here in terms of real issues.

“In light of what is going on in our communities, it is absolutely vital that women and families get the support that they need”.
rapecrisisni.com