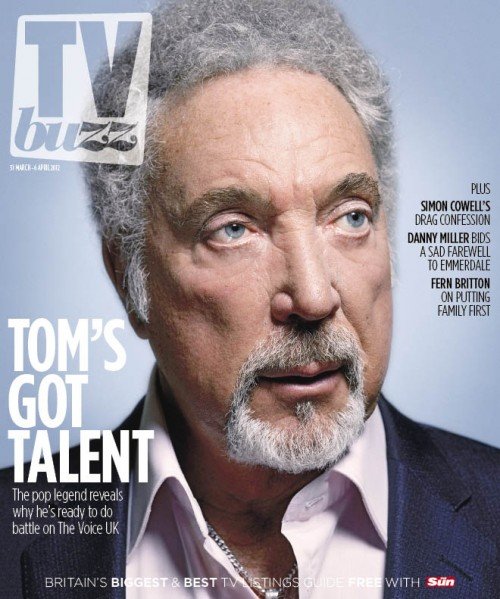 Sir Tom Jones talks to TV Buzz Magazine from The SUN, about the challenges and joys of being a coach on the BBC’s new talent show, The Voice UK.

He is not finding it easy though, and confesses to TV buzz, “This is the hardest thing I’ve ever done.”

He adds, “You have to critique people, which I’ve never done. I have to make a decision about somebody’s future and it’s really got to me. I’d seen people on other talent shows get upset and thought: ‘That’s just TV.’ But here I am, watching our singers and I end up going: ‘Oh s***,’ and trying to keep it together.”

In late April we will see two contestants from one mentor compete in a duet, known as the battle rounds. Sir Tom reveals, “For me, the toughest part of the show is the battle rounds, because you have to pick one person over the other,” he says, “One of the hardest was when I had to choose between two female singers who were as powerful as each other, but one was a grandmother and had been around a long time.

I was thinking: ‘She has never had a break, so should I take that into consideration?’”

He goes on, “I just had to hope someone came up a touch and the other girl did, so that’s what made my decision. It’s very emotional, but that’s what I love about this show – you never know what will happen on the night.”

Tom admits that the decision to take his award-winning career in a different direction was risky. “It wasn’t an easy decision,” he says, “But ultimately I went into great detail about who else would be involved before I signed up. I thought about the judges on other talent shows and wondered: ‘How can that person judge a singer when he or she has never been in that position?’ I don’t think you can do that.”

It seems like it has come down to The Voice UK verses The X Factor, and Tom shares his opinion, “The difference is there are no freaks on The Voice UK!”

“But it upsets me when, on The X Factor, the judges are cruel to people needlessly,” he says. “All of us on the panel think that way. We’ve all been through that sort of rejection, whereas people on other shows haven’t – they’re just hearing it from a commercial or a punter’s point of view.”

Sir Tom reveals to TV buzz how he feels about his fellow judges. “Everyone is very professional,” he insists, “Danny is an absolute riot and because he’s Irish we have a strong Celtic connection. Will.i.am is funny and then there’s Jessie – she’s a young girl, but she is very strong and really knows what she’s talking about. She can explain things about the voice and breathing in great detail. It’s stuff I learnt when I was younger, but you forget it all.”

He adds, “Will.i.am and Jessie do have a little banter once in a while, but Danny said to me: ‘Let them argue. We can be cool.’ It is a great combination.”

Tom believes that The Voice UK is capable of potentially uncovering an icon to emulate his level of success. “I do think you could find a future Tom Jones in a show like this,” he says, “I don’t know whether I will discover it in one person – maybe a combination of people. Though I don’t think there should be another ‘anyone’ – Frank Sinatra was Frank Sinatra, Elvis Presley was Elvis Presley, and there are loads of bloody Frank and Elvis sound-alikes.”

Tom admits that he would not be fazed about auditioning for a talent show if he was just starting his career now, “That’s what I do every time I stand on stage. You know that people are always going to be wondering: ‘Is Tom singing as well as he used to?’”

He says, “Even though I’ve been doing this for so long, it’s a continual learning curve. I like to do things that aren’t expected of me and love wondering what will happen next. There is no master plan, things just happen.”
Living life on the edge, Sir Tom Jones!
READ MORE IN TV Buzz Magazine from The SUN
facebook.com/TVbuzzmag