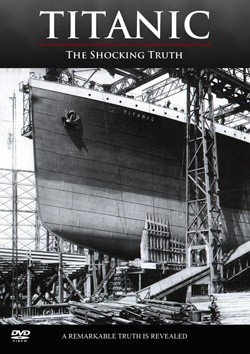 On 15th of April 1912, the Titanic – the largest moving object ever fashioned by the hand of man hit an iceberg on its maiden voyage and sank in the middle of the North Atlantic, 1507 were lost.

The tragedy has been well documented in books and on films; it is a story which has left many questions unanswered.

‘Titanic – The shocking truth’ explores the conspiracy theory that the Titanic never sank to the bottom of the Atlantic.

The film is based upon research and includes evidence of both the British and American inquiries, eye witness reports of survivors, newspapers, photographs, film and radio of the day.

For the first time a fresh look is taken into the mystery surrounding the Titanic and reveals evidence that leads to a compelling and shocking hypothesis that the ship that plumages two miles to the bottom of the sea was not Titanic but the sister ship the Olympic.

The documentary throws light on the reconstruction of the events behind the disaster and the reasons for it.

Were White Line and the British Government responsible for possibly one of the greatest frauds and sea tragedies in living history?

Street Car Motion Pictures ‘Titanic – The Shocking Truth’, a Barrie Kiel production of an Andrew Newton Film an directed by Tim Spring is out very soon.