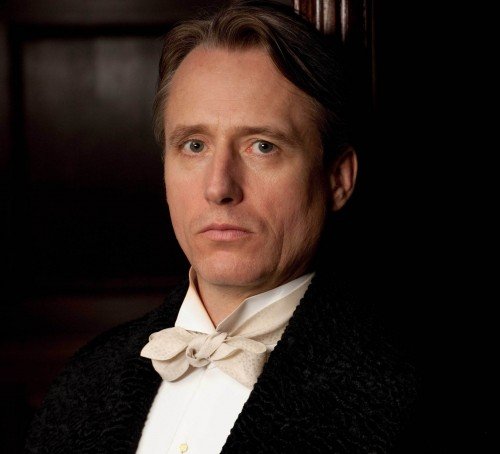 Linus Roache plays Hugh, Earl of Mantonin, in the new four-part TV series of Titanic, talks to TV Buzz Magazine from The SUN.

The actor reveals it is the posh-est person he has ever portrayed, “I haven’t played too many aristocrats. It’s actually quite challenging trying to appreciate that degree of entitlement, what it’s like to be someone who simply knows that the world is for them.

I was mostly with all the other poshos during filming, but the great thing about this show is that when the iceberg hits, everyone gets intermingled.”
The costumes also help too, as he explains, “If you put on a good Armani suit in real life you feel better, don’t you? But I felt sorry for all the ladies with their corsets and petticoats and bonnets. I was very glad to be a man – I was in and out of make-up in ten minutes.”

During filming, the actor also got a visit from his dad, Bill Roache, who plays Ken Barlow in Coronation Street, “Dad was on a cruise in the area so he came and had a nose around the set. He absolutely loved it. It would have been fun to get a life jacket on him and get him involved, but he’d have had to stay for three days to finish filming it!”

Linus started with his dad and brother in Coronation Street last year, so it’s clear acting runs in the family: “It feels totally normal seeing my dad on the telly – he’s been on it for 50 years, as long as I’ve known him. We do talk a lot about acting as a family.

What’s so cool about my dad is he’s still working at how to be a good actor and developing his skill. And I think that attitude keeps you young. Look at him – he looks great!” We think so too!
TV Buzz Magazine from The SUN.
facebook.com/TVbuzzmag