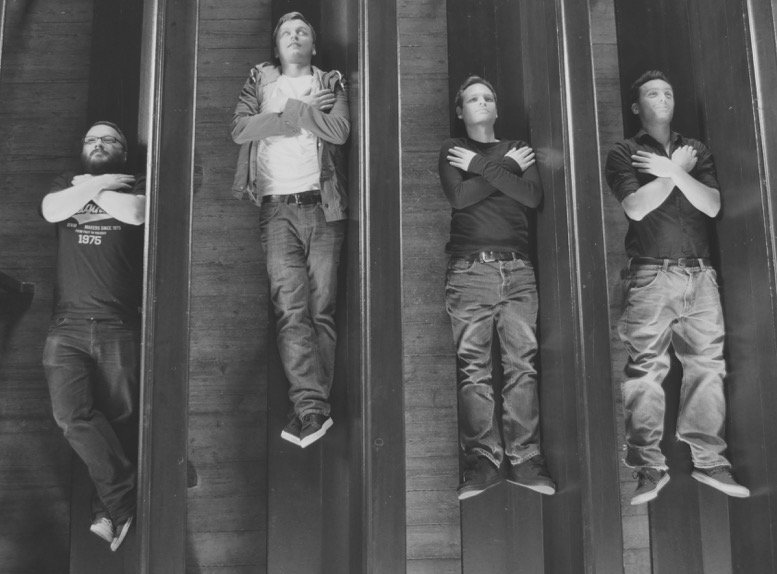 Hi Thula Borah, how are you?

Hi. Pretty good, but I have an inflammation in my right ear and the doctor has just told me to avoid loud music and wearing headphones, which isn’t great. I’m normally not one to promote ignoring medical advice but I’m afraid in this case I’ll have to.

We’ve been described as genre hopping which I like, but I see our sound as being grounded in a mixture of alternative rock from the 90s, such as Smashing Pumpkins, with the post-rock of Mogwai and Sigur Ros.

Your EP ‘Near Life Experience’ showcases a diverse range of influences and ideas, was this a conscious effort or something that happened naturally?

In the main it has happened naturally. For this EP we had a longlist of 14 songs to consider recording, so the new release could have been much more diverse and disparate. In the end we did make a conscious effort to reign it in a bit, but I think our next release might be very different and showcase another side to the band.

How does the writing process work in the band?

Either I’ll demo a song I have written, our other guitarist Kev will bring in a riff he has came up with and we’ll write something from there or something spontaneous will happen in rehearsals and we’ll just jam it out until something take shape.

The Glasgow music scene is extremely vibrant, can you tell us the pros and cons an up and coming band faces trying to make it in such a competitive environment?

The pros are that there is always something happening. There are so many bands, venues and promoters that there is always a gig to play or to attend. The cons are the flipside of that – it makes it harder to stand out and give yourself a platform to find your audience or niche or whatever in such a huge, diverse and often very talented sea of music with everyone vying for their share of exposure. I don’t mean that in a competitive sense, purely pragmatically, as just about everyone we’ve played with has been very nice, supportive and helpful. Another pro is that you don’t have to look hard for a quality studio, engineer, musician, artist etc to work with.

What is the scene like in Glasgow? Can you recommend any bands you have seen or played with?

As you say, very vibrant. It is heaving with activity. There are so many venues with all manner of live music every night of the week. There are too many bands ans artists to do justice to recommendations but my favourite new bands that I have heard recently are Codist and The Van T’s but we haven’t had the pleasure of playing with either.

If you could support any band past or present who would it be?

Well, since Kurt Cobain was my inspiration to pick up the guitar I can’t see past Nirvana. I’d love to be like Dr. Sam Beckett in Quantum Leap but only ever leaping into the bodies of famous musicians so I could experience what it was like being in the most influential bands across the ages.

For those who haven’t seen you play, what is a Thula Borah live set like?

Loud. Heavy. Hopefully intense. We don’t move around too much on stage so I love playing to visuals whenever we get the chance.

Will you be playing any live shows in the coming months?

Yes, we are currently putting together our tour dates for early this year. So far we can confirm The Bungalow, Paisley on the 26th of January, Mad Hatters in Inverness on the 18th of February, and the 16th of April at Nice N Sleazy in Glasgow.

What does the rest of 2017 hold for Thula Borah?

We’ll be putting our final touches to our tour dates for the start of the year, so please check out our website and social media to stay up-to-date. Then hopefully we’ll play plenty of festivals in the summer and later in the year we’ll be working on and recording new material.