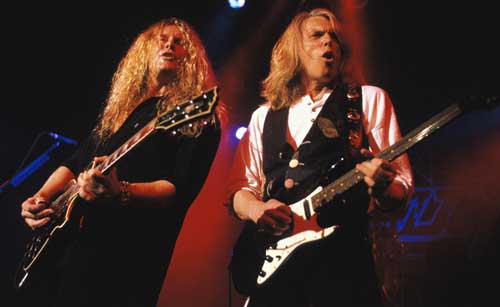 After signing to Decca Records, they issued two albums, neither of which charted. A change of fortune occurred after they recorded a novelty rock version of the traditional “Whiskey In The Jar”. The single reached the UK Top 10 and popularized the band’s blend of Irish folk and strident guitar work. The band then underwent a series of line-up changes during early 1974. Bell was temporarily replaced by Gary Moore (b. 4 April 1952, Belfast, Northern Ireland), after which two more short-term guitarists were recruited, Andy Gee and John Cann. The arrival of guitarists Brian Robertson (b. 12 September 1956, Glasgow, Scotland) and Scott Gorham (b. 17 March 1951, Santa Monica, California, USA) stabilized the line-up as the band entered their most productive phase.

A series of UK concerts throughout 1975 saw them make considerable headway. 1976 was the breakthrough year with the acclaimed Jailbreak hitting the charts. The driving macho celebration of “The Boys Are Back In Town” reached the UK Top 10 and US Top 20 and was voted single of the year by the influential New Musical Express. In early 1977 Robertson was forced to leave the band due to a hand injury following a fight and was replaced by the returning Moore. Another UK Top 20 hit followed with the scathing “Don’t Believe A Word”, drawn from Johnny The Fox. Moore then returned to Colosseum and the recovered Robertson took his place. Both “Dancin’ In The Moonlight (It’s Caught Me In The Spotlight)” and Bad Reputation were UK Top 10 hits and were soon followed by the excellent double album, Live And Dangerous. The torturous line-up changes continued apace. Robertson left in August 1978 and joined Wild Horses. Moore returned and helped record Black Rose, but within a year was replaced by Midge Ure (formerly of Slik and the Rich Kids). The following year saw the band scaling new commercial heights with such Top 20 singles as “Waiting For An Alibi” and “Do Anything You Want To”, plus the bestselling Black Rose.

By late 1979, the peripatetic Ure had moved on to Ultravox and was replaced by Snowy White (b. Terence Charles White, 3 March 1948, Devonshire, England). In early 1980, Lynott married Caroline Crowther, daughter of the television personality Leslie Crowther. After recording some solo work, Lynott reunited with Thin Lizzy for Chinatown, which included the controversial Top 10 single, “Killer On The Loose”. The heavily promoted Adventures Of Thin Lizzy maintained their standing, before White bowed out on Renegade. He was replaced by John Sykes, formerly of the Tygers Of Pan Tang. One more album, Thunder And Lightning, followed in 1983, before the band made their final appearance in Nuremburg in September 1984.
A posthumous live album, Life-Live, was issued at the end of that year. Its title took on an ironically macabre significance two years later when Lynott died of heart failure and pneumonia after a drugs overdose. Four months later, in May 1986, Thin Lizzy re-formed for the Self Aid concert organized in Eire by Bob Geldof, who replaced Lynott on vocals for the day. The 90s found Brian Robertson touring with tribute band, Ain’t Lizzy, while the original band’s name remained on the lips of many young groups as a primary influence.
Scott Gorman â€“ John Sykes – Marco Mendoza – Tommy Aldridge