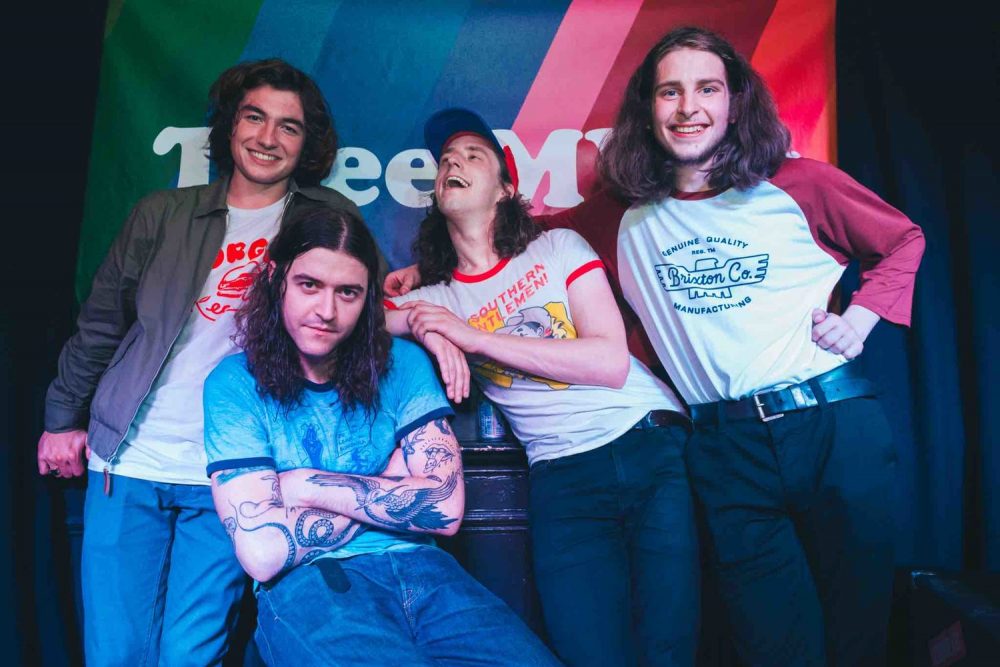 Hi Thee MVPs how are you today?

Very well thank you, the sun is out, our guns are out and our buns out. Feeling mighty toasty.

What’s your new single ‘American Dreamin’’ all about?

Joel moved to Southern California when he was a kid and lived there for 13 years before having his Visa revoked in 2014. He wrote the song when he first found out that he’d have to move back to the UK right after finishing school. The song is basically about the experiences and music he was a part of in California and how they influenced his view on the big move ahead of him.

And how would you say it differs from your previous releases?

Joel sings on it beautifully rather than Charlie singing on it badly! Haha, It’s an old song – much more downtempo and less fuzzy than the usual stuff.

One of us comes in with a passable idea of a song then we turn it up to 11 and just work out the kinks while adding in everyone’s unique flavour.

In today’s world what constitutes the American Dream?

Working fucking hard and believing in what you are doing without worrying about where it’ll get you. And being able to BBQ whenever you like without consequence.

As a self-styled ‘Thames Pop’ band, which other bands would you recommend from the scene?

Thames pop is a sludgy, ash grey version of whatever sounded pretty before it ended up being dumped in the Thames. There have been many pioneers of Thames pop in the past even if they didn’t know what it was called at the time. We’re a secret order that like to keep our cards close to our chest and not revel too much.

Basically the first six Sabbath albums or anything by Billy Childish.

Black Sabbath
Humble Pie
The Ramones
The Cribs
OFF!
Fugazi
New Bomb Turks
MC5
At the Drive in
Any band that ever put in work to sound like the best they could be.

We don’t really care, we do it because we love it and we hope the man on the street does too. Anything else is a bonus.

For those who haven’t seen you play live, what can people expect from Thee MVPs live performances?

A good sweaty time all of the time.

Finally, what does the rest of 2018 have in store for Thee MVPs?

We all live in a house in Leeds together now so we’re thinking of taking a cooking class together. We’re also really excited to get some more furniture for the place and to borrow a lawnmower for the front garden.

We’ve also finished recording our debut LP and we hope to be gigging again in the autumn. We’re planning on taking the summer off to focus on writing. That being said, we’ve played over 50 times already this year, we suck at turning away a good time.