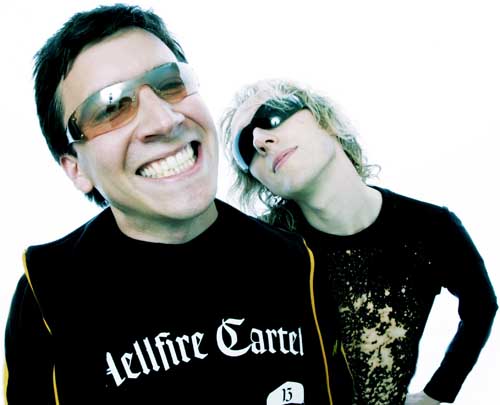 THE YOUNG PUNX are London based Hal Ritson and Cameron Saunders. Autumn 2007 sees the release of their debut album â€˜Your Music Is Killing Meâ€™, a radio friendly crossover cocktail of elements of popular culture mashed with pumping house, nuskool breaks, drum and bass, heavy rock and 80s pop, jazz and classical, oh yesâ€¦ and the BBC Shipping forecast. Their fresh and energetic sound – or as they put it “Mashpop and punkstep” is the natural next step in the evolution of mashup music creating something at once original and resolutely accessible.

The Young Punx are already highly regarded as dance producers across the globe. Their own records, along with their highly in demand remixes, have placed them amongst the dance elite, with regular features in the dance press, numerous top 5 club chart positions and numerous radio plays (over 100 Radio 1 plays at the last count). Their records have also featured on numerous compilations. The Young Punx have developed a reputation for pioneering new sounds and not being afraid to break the rules – one minute producing filthy electro, the next recording a 20 piece live brass section creating funky mashed up house. Club Djâ€™s have learnt to expect the unexpected from The Young Punx and their fresh approach and humour has won them a strong following across the world. This cheeky pop culture mentality has seen them catch the headlines in mainstream media as diverse as The Sun, The Mirror, La Stampa, Radio 4 news and even BBC 2 Newsnight!

The Young Punx are far from your average dance producers. The Young Punx have a full live band and have had a busy summer playing live shows. Their performance at this years Glastonbury Festival received phenomenal feedback on their website and myspace pages. With numerous punters describing their show as one of the freshest and most entertaining gigs of the festival. The Young Punx are also playing this years Summersonic Festival in Japan, sharing the bill with artists such as Gwen Stafani, The Klaxons and Motorhead. In December 06 The Young Punx performed to 25,000 at the Nano Mugen festival in Japan, with live footage being broadcast on TV networks. Along with Hal and Cameron, The Young Punx, the live band consists of Tiffany Gore on vocals, Simon Bettison on drums and Guthrie Govan on guitar. Guthrie was recently voted guitarist of the year in Guitarist Magazine where he is often featured on the front cover, and regarded as one of the best guitarists in the world.

The Young Punx also DJ across the globe and, just this year, have played in the USA, Europe, China, Japan and Russia. Along with a residency at Positiva Calling at The Cross, their DJ mix shows have also been broadcast on numerous stations including Judge Jules and Dance Department in Holland.

The Young Punx began 2007, and the build up to their album release, in their own unique style with â€˜Rockallâ€™, a quirky mashup of the UK shipping forecast, a broadcasting institution the guys enjoy listening to on the way back from late nights clubbing. The record samples a genuine gale force 10 shipping forecast read by BBC Announcer Alan Smith. The video features break dancing fishermen, women with beards and Mighty Boosh star Mike Fielding (AKA Naboo). The video was featured on E4 and MTV dance. The record and video also caught the attention of the UK media with features and articles appearing in The Sun, The Sunday Mirror, The Daily Record, BBC 6 Music, BBC Radio 4, The BBC local network, ITN news and Newsnight. To the best of our knowledge, it is the first time a music video has ever been shown on Newsnight. The single was also featured on Itunes front page of their store.

This was followed by the first full release single off the new album â€˜Youâ€™ve Got Toâ€™ in May 2007. The single featured a video from acclaimed animator Han Hoogerbrugge and a phenomenal remix from Norman Cook (Fat Boy Slim) which samples Manu Chaoâ€™s â€˜Bongo Bongâ€™. Norman remixed the track for free, being a big fan of the band. The single was also featured on top selling EA computer game FIFA 2007 and was number 1 in the Podcast Music chart, meaning it was the most used track used on podcasts across the globe.

The video was playlisted on The Box, MTV Dance, E4 and received several plays on Channel 4â€™s â€˜Freshly Squeezedâ€™. The record itself was placed on the Galaxy Network playlist and was also championed by numerous regional and national DJâ€™s in the UK. The record peaked at No. 3 in the Club chart. The single is now being release in Russia (Diamond), Japan (Avex), Italy (Oxyd), Scandanavia (Discowax), Australia (Central Station).

At the time of writing the album â€˜Your Music Is Killing Meâ€™ has been released in Japan along with the single â€˜Wake Up Make Up, Bring It Up, Shake Upâ€™. Boosted by a huge promotional campaign, the album has received phenomenal support from retail with huge displays in the major retail stores. The Young Punx have also been busy to the early hours of every night with a heavy promo and interview agenda in their build up to the Summersonic festival.

“The new kings of dance music” – Hard to Find Records

“The most insane/catchy tune of the year” – Fatboy Slim