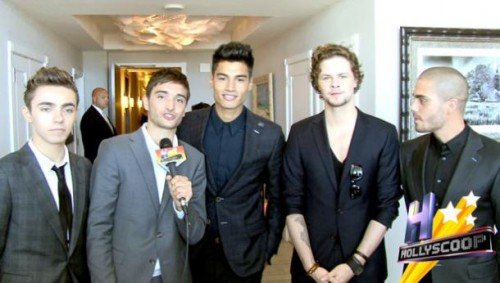 The nice people at Hollyscoop chatted with The Wanted at the VMA’s were they revealed that they are basically besties with David Beckham.

“I was in a steakhouse the other day, David was there with his friend and he goes, ‘Tom! Tom!’ I was like, ‘he knows me personally, like one-on-one name basis. This is the coolest moment of my life,” says Tom Parker.

The fivesome were also invited to Romeo Beckham’s 10th birthday party which went down at the go-cart range and the boys says the Beckham parents got a little TOO into the go-carting.

“They are, in all honesty,” says Nathan Sykes.

Siva Kaneswaran then tells us how he found himself getting rear ended by David Beckham. In his go-kart! Minds out of the gutters, readers, c’mon!

“We’re flying on the go-karts and suddenly I get a massive smash in my car,” says Siva before turning around to find out that none other than David Beckham has smashed his kart into the boy bander.

Then Tom jokes, “I probably shouldn’t have hit up the rear by Dave.”
READ MORE hollyscoop.com