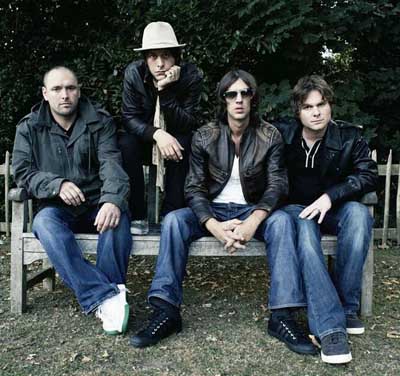 Due to phenomenal demand for The Verve’s sold-out shows in November, the band can now announce a second UK tour for December 2007.

After splitting up the best part of a decade ago, one of the most influential British bands of the 1990â€™s are back! The Verve, known for massive hits like Bittersweet Symphony, Sonnet, Lucky Man and The Drugs Donâ€™t Work are currently recording a new album set for Autumn release; and today announce that their only Irish date this year will be Monday 17th December in the Odyssey Arena, Belfast.

The December dates are:

The Band, Richard Ashcroft, Nick McCabe, Simon Jones and Pete Salisbury are currently in the studio working on their fourth album, due for release in 2008

The Verve were formed in Wigan in 1990, releasing their debut album â€œA Storm In Heavenâ€ three years later. It was followed by the hugely acclaimed â€œA Nothern Soulâ€ in 1995. In the summer of 1997, The Verve established themselves as one of the most crucial English rock bands of all time with the release of â€œUrban Hymsâ€, a worldwide success containing the landmark singles â€œBittersweet Symphonyâ€, â€œThe Drugs Donâ€™t Workâ€ and â€œLucky Manâ€.

Tickets go on sale THIS FRIDAY 5th OCTOBER at 10am from Odyssey Arena box office, Virgin & all usual Ticketmaster outlets.