THE Ting Tings arrived at the Spring and Airbrake in Belfast on the back of masses of radio airplay and critical acclaim.


The Belfast audience were well within the rights to expect something a bit special from the electro pop duo but Katie Walsh and Jules De Martino never really caught the attention of the Friday night crowd.

Gig review by Keith Bailie
The Spring and Airbrake was jammed packed with music lovers hotly anticipating The Ting Tings and their hit single Great DJ, and they didnâ€™t have to wait long. The Wigan based band opened their set with the buzzing electro anthem in an attempt to whip the crowd into a frenzy. 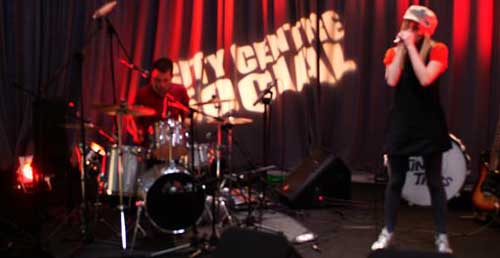 This was only partially successful. While the crowd roared along to Great DJ it left crowd with little to anticipate, with few gig goers knowing any of their other tunes. Although new single Thatâ€™s Not My Name proved to be a rare moment of excitement, showcasing the stunning Katie Walshâ€™s vocal talents at their best.

The most disappointing element of the night was the length of the set. A mere seven songs, clocking in at around half and hour, were played before the pop duo shuffled off stage to a crowd who were more surprised it was over than anything else.
The encore perhaps said more about the future prospects then a gig review ever could. Upon return to the stage they burst into Great DJ once again. An almighty cheer went up and Belfast danced again.
As fantastic as Great DJ is, Ting Tings will need to add more strings to their bow if they are going to become full time indie superstars.
myspace.com/thetingtings