With 32 Top 40 U.K. hits spanning more than three decades, The Stranglers are a musical institution. They will play The Mandela Hall on 14th October. The Stranglers have returned to a four-piece line-up.
With founding keyboardist Dave Greenfield, original drummer Jet Black, and original bassist Jean-Jacques Burnel, who shares vocal duties with guitarist Baz Warne, who joined the group in 2001.

First formed in 1974 as the Guilford Stranglers by Burnel, Black, Greenfield and Hugh Cornwell, The Stranglersâ€™ black humor and straight-talking approach was initially interpreted by many as aggressive on its face. They made their name with a raw talent that throttled many of their peers, with traces of Television and the Doors heard in their arrangements. 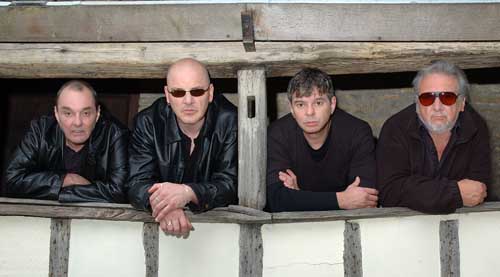 The notoriety the band attracted for its lyrics and in-your-face performances was embraced by the burgeoning 1970s London punk rock movement. In 1976, they opened the Ramonesâ€™ first London concert and later for Patti Smith. The debut single from their legendary 1977 album debut, Rattus Norvegicus, â€œ(Get A) Grip (On Yourself),â€ cracked the U.K.â€™s Top 50. The albumâ€™s second single, â€œPeaches,â€ invaded the Top 10 and launched The Stranglers into the genre-defining front lines of British punk.

After Cornwellâ€™s departure in 1990 the band continued touring internationally, maintaining their live profile. Their Greatest Hits CD has sold more than a million copies and their music has been heard in films including Sexy Beast and Snatch. The Stranglersâ€™ last album for EMI, Norfolk Coast, was released in 2004 and was critically acclaimed as their best in more than 20 years. The album included the U.K. hit singles â€œBig Thing Comingâ€ and â€œLong Black Veil,â€ giving the band the rare accolade of maintaining chart hits across four decades.
stranglers.net
myspace.com/thestranglers
CDC LEISURE PRESENTS
THE STRANGLERS
Tuesday 14th October
MANDELA HALL
Tickets Â£23.00
Doors 7pm
Pre-Sale Tickets on ticketmaster.ie ; from 9am on Thursday 24th April and on sale from Katy Dalyâ€™s, Queens Student Union, Zavvi & all usual Ticketmaster outlets from Friday 25th April. Credit card bookings & info 0870 243 4455 or book online at
geturticket.com
wegottickets.com