There are not many bands who in this day and age can sell-out a venue on more than one night in a row. But then the Danny O’Donoghue fronted The Script are not just any band.

Formed in 2002 by Dubliners O’Donoghue and his long time friend Mark Sheehan the band worked solidly in building a reputation as the next big band to break out of Ireland. Drummer Glen Power rounded off the group nicely and they have not looked back since.

Their self-titled album in 2008 rocketed them to the main stage and they have never looked back since.

Each year sees the band scale to new heights of popularity. Your reviewer has attended many concerts at Belfast’s Odyssey Arena, but very few of them have had the electric atmosphere and sheer crowd enthusiasm that The Script generated tonight.

Even with the credit crunch it is wonderful to see people make the effort to go out, support artists and most of all let their hair down. 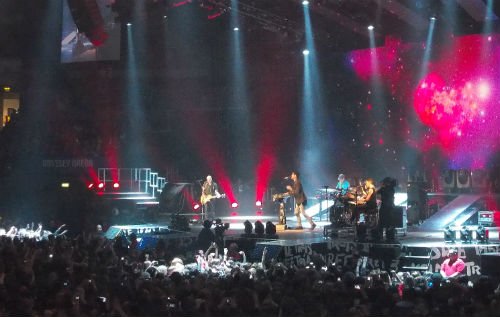 O’Donoghue may have achieved a new level of fame through his appearance a coach on UK singing competition The Voice, but that cannot take anything away from the music he, Shehan and Power create. Their backing artists deseve a mention too, each playing their role to perfection.

With three albums under their belts there was plenty of material to work through here and the pace never let up. The sea of fans offered up a surprisingly mixed cross section of generations, proving that pop is a genre everyone can enjoy.

Among the sure fire crowd pleasers you expect from live shows The Script belted out new song ‘If you Could See Me Now.’ (which features a nice mix of rap alongside Danny’s rich vocals). Early hits‘The Man Who Can’t be Moved’ and ‘Breakeven’ had the entire audience on the feet and singing along. Even without guest artist Will.I.Am’s presence hit single ‘Hall Of Fame’ proved to be the ideal way to round off proceedings.

As the glitter fell from the ceiling and the light show faded the Odyessy was filled with united feeling that we all had witnessed something very special indeed. We at Fame feel privileged to have been there and hope the fans at the other NI dates and rest of the tour itself get as much enjoyment out of the shows they see. 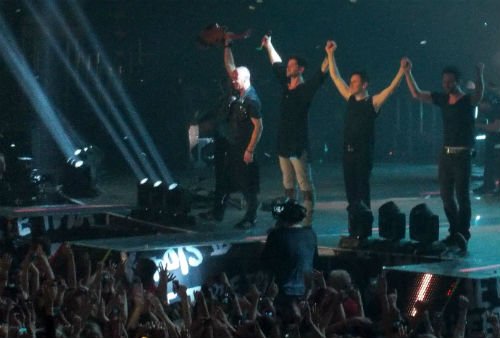 We can guarantee you’ll sing-along, get drawn in to the enthusiasm and energy O’Donoghue produce on stage and you will indeed have the urge to hit the shops or the web and pick up an album or three from The Script lads.