During the past twelve months, The Saw Doctors have toured non stop in Europe, USA, the UK and Ireland promoting their new album entitled The Cure. The Galway band made four trips to the USA, selling out the Nokia Theatre in Times Square, New York and headlining the Governors Inauguration Ball in Baltimore, Maryland.
Last summer, The Saw Doctors played every Festival from Shetland to Dubai and back again for the V Festivals in Essex and Staffordshire. In November, The Saw Doctors turned up in Celtic Park, Glasgow, playing three songs before the Manchester United versus Celtic Champions League match.

Now in their nineteenth year as a touring band, The Saw Doctors revolve around the songwriting partnership of Davy Carton (Vocals) and Leo Moran (Guitars).

The Saw Doctors came together in Tuam, Co. Galway in 1988 when Leo Moran, realising that the potential for Irish reggae was somewhat limited, quit Too Much For the Whiteman, and got together with Davy Carton after his punk band Blaze X disbanded, despite the fact that their first single â€œSome Hopeâ€ was chosen as Single of the Week on Irish radio.

After picking up a lot of Irish press and entertainment awards in the early ninties and posting a second Number One album (All The Way From Tuam), The Saw Doctors set about touring the UK and in February 1996, the band’s third album â€œSame Oul’ Townâ€ went to Number Six in the UK Top Twenty, yielding two Top Twenty UK singles, World of Good, and To Win Just Once. The Saw Doctors appeared on Top of the Pops in January and July 1996 to promote the two singles.

â€œFrom country to punk to pop and rock’n’rollâ€, explains Leo Moran on their success, â€œwe stole all our favourite bitsâ€.

In April/May 1997, the Saw Doctors undertook their first major coast to coast US tour and as a result landed a US record deal with Paradigm Records in New York. The compilation album, Sing A Powerful Song, was released in November 1997, prompting Geoffrey Himes to write in The Washington Post â€œthe Saw Doctors are one of the worldâ€™s most appealing roots-rock outfitsâ€ â€¦.in â€œTo Win Just Onceâ€ they have crafted an anthem for the losers of the worldâ€.

Songs From Sun Street, the Saw Doctors fourth album was released on both sides of the Atlantic in 1998. The album release was celebrated in the UK with a sell out show at Londonâ€™s Royal Albert Hall. In America, the Saw Doctors headlined the American Fleadh concerts with Van Morrisson and Sinead O’ Connor. At the Fleadh in San Jose (June 99), they had the crowd â€œjumping like human pogo-sticksâ€ according to the San Jose Mercury News. 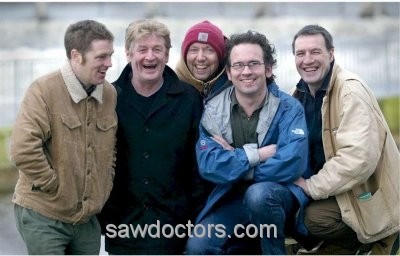 In a Saw Doctors’ song, you’ll listen in vain for the usual swaggering rock cliches about life on the road, drug problems and easy sex. Instead, continuing the tradition of all-time greats from Woody Guthrie and Hank Williams, their songs range from bringing in the harvest, to running away to join the army; from the plight of Ireland’s unmarried mothers to the effect of strong religion on a nation’s youth; from playing gaelic football against a neighbouring village to loving the prettiest girl in town but lacking the courage to tell her.

During 2000, The Saw Doctors spent most of the year writing and recording their fifth studio album, Villains?, working with programmer and producer, Giles Packham. Villains? was released to critical acclaim in October 2001. Craig Harris noted in the Boston Globe â€œwith their latest CD, Villains?, a hook-laden mix of rock, pop and traditional roots, the Saw Doctors assume their place next to U2, The Pogues, and Thin Lizzy as one of Ireland’s great rock bandsâ€.

In July 03, Tyrone Productions (Riverdance Producers) filmed a one hour documentary on the Saw Doctors and the documentary â€œA Different Kind Of Worldâ€ along with a 80 minute concert that was recorded at a live show in Galway, was released on DVD and CD in March 2004. The DVD and live both entitled Live in Galway were launched at a sell out show at New York’s Hammerstein Ballroom.

Over the years, The Saw Doctors have built up a reputation as a great live band. They have toured in Australia, Canada, USA, Sweden, Germany, Holland, Norway and the UK. Paul Sexton of The Times in London observed that â€œif they could bottle the sort of bonhomie that can make an entire concert hall feel better, The Saw Doctors would have the medicine show to end them allâ€.