â€˜Donâ€™t You Fake Itâ€™, their debut album, has to date sold over half a million copies in the U.S. The albumâ€™s songs are flush with the determination, hunger and energy of youth (the average age in the band is 21). And while they tap into elements of pop-punk, pop, screamo, and metal, they combine them in a way thatâ€™s both surprising and invigorating. 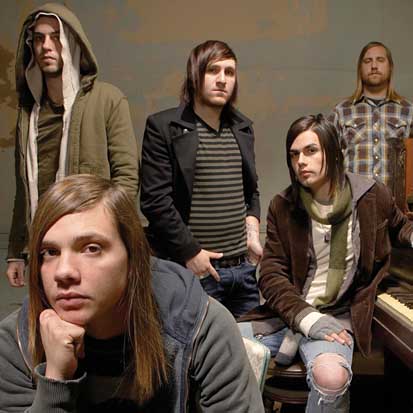 In addition to being musically adventurous, the band donâ€™t shy away from confessional, confrontational lyrics. The cantankerous â€˜Seventeen Ainâ€™t So Sweetâ€™ addresses a female friend who has an amazing voice but has been unable to make a dent in the music industry because she doesnâ€™t look like a plastic pop idol, and the reflective, flowing â€˜Your Guardian Angelâ€™ shows Winters letting down his guard and trying to express what it really feels like to be in love. But itâ€™s â€˜Face Downâ€™, a scathing indictment of domestic abuse, which makes the most emotional impact.
As Ronnie Winter, the bandâ€™s singer points out; â€œWhere I come from, you see it when you go to the store, you see it when you stop for a smoke, you see it all the time. Itâ€™s something everybody sees and doesnâ€™t do anything about because theyâ€™re just so accustomed to it. I was the same way and I was a victim of it. So the best way I could think of to get people to not make the same mistake I did was to write about it.â€ The single and its accompanying video, which tackles the issues raised in the song, had a huge impact in the U.S., where it has remained in rotation at rock radio and TV since its release last year, and recently starting making in-roads at pop radio and TV.

From the chugging riffs and serpentine guitars of â€˜Atrophyâ€™ to the steely rage of â€˜Justifyâ€™ to the tender lament of â€˜Cat and Mouseâ€™, The Red Jumpsuit Apparatus are determined to get their music across to the masses.

The bandâ€™s recent U.S. headline tour sold out in a matter of weeks. They will be the headliners for the entire Warped Tour this summer.