In 2007, The Police thrilled millions of fans around the globe. Their much heralded tour has sold over 2.5 million tickets and garnered numerous accolades including: Major Tour of The Year (Pollstar), as well as “Tour of the Year” and “Top Selling Tour of 2007” (Billboard Magazine). 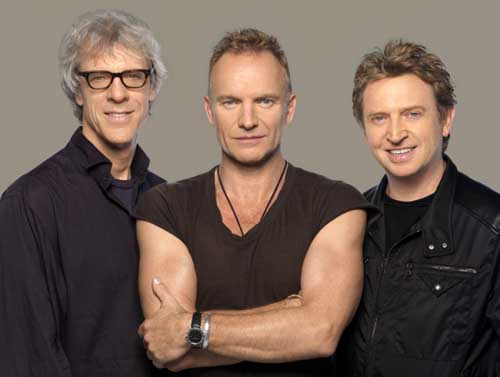 In 2007, The Police concert schedule included sold out performances at many of the most historic and renowned stadiums around the world including: Croke Park (Dublin), Twickenham Stadium (London) Stade de France (Paris) and River Plate Stadium (Buenos Aires). As already confirmed, The Police will return to Europe this summer for a select number of prestigious festival events including such performances at the Isle of Wight and Hyde Park Festivals in the UK, the Rock In Rio Festival in Spain, and the TW Festival in Belgium. The Police will also return to Germany, France, Spain and Italy performing at various arenas and stadiums through June and July.

And now, due to overwhelming demand, Irish fans who were unable to see The Police will have the opportunity to catch the top selling tour of the year with their appearance this summer at Stormont, Belfast.