Gary Numan’s classic, influential album, The Pleasure Principle is being re-released as a double CD edition (featuring demos and B-sides on the bonus disc) 30 years after it debuted at Number 1 in the UK charts.

The singer’s single from the album, ‘Cars’ also climbed to the top of the charts, an achievement he’s celebrating with a 16 date UK tour starting in mid November.

The Pleasure Principle was the point where Numan became a huge international solo star, reaching the Top 10 in the States with ‘Cars’ and Top 20 with the album. Given the conservative nature of the music scene in America at that time and the fact that the LP didn’t even feature any guitars, let alone conventional song structures (‘Cars’ doesn’t even have a chorus), this is one of those special moments in pop music when a new idea breaks through all the boundaries.

The Pleasure Principle pioneered electronic pop music on a new scale, becoming a much bigger hit worldwide than Kraftwerk or anything from the Bowie/Eno ‘Berlin’ trilogy. And the fact that it was so different and had such a major impact in America (crystallised when Numan performed ‘Cars’ and ‘Praying To The Aliens’ in front of 40 million people on the Saturday Night Live Show) means that there’s a direct link from The Pleasure Principle to the new musical forms that were born in the USA over the next decade – namely hip hop, industrial and techno. 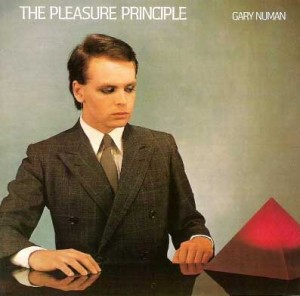 As the NME recently noted, ‘every hip-hop production titan ever notably Dr Dre has nicked the opening beats from the track ‘Films’.

The likes of Timbaland and The Neptunes’ minimal pop comprised of just exquisitely produced drums and simplistic synthlines are heralded as been futuristic genius in the 21st century; The Pleasure Principle shows that Gary Numan was doing the same thing 30 years previously. His influence on hip-hop, while rarely recognised, is enormous.

His influence on electronic music in general is unparalleled.’ When GZA of the Wu-Tang Clan’s covered ‘Films’ last year, he was actually taking hip hop back to its roots as the track features one of the original break breats (in fact it features on the hugely influential, Ultimate Breaks & Beats compilation series) .

In industrial music both Nine Inch Nails and Marilyn Manson have namechecked Numan as a significant influence, with the former currently performing the track ‘Metal’ on his tour. ‘After hearing ‘Cars’ I knew I wanted to make music with synthesizers,’ says Reznor. ‘The Pleasure Principle is fucking great because it’s so cold sounding.’ Meanwhile, techno pioneers ranging from Carl Craig to Juan Atkins were grabbed by this strange, futuristic music, creating a relationship between Numan and dance music that has spawned the likes of the Basement Jaxx’s ‘Where’s Your Head At’ (samples ‘M.E.’ from The Pleasure Principle) and the ‘Cars’-mutating ‘Koochy’ by Armand Van Helden. As the newly reformed Devo recently commented, The Pleasure Principle is, ‘so original and cool and ground breaking and in a way classic. Like, it still sounds great today . . .