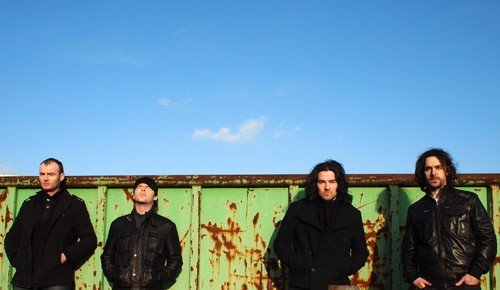 Irish band The Plea have been plugging away in pubs and clubs across the UK, Ireland and even the United States in the last few years.

Now back in Ireland the band are set to release their debut single ‘Oh Ah Yay’ in late April and debut album Dreamers Stadium in May.

We caught up with the band to chat about these exciting releases and their career to date.
‘Oh Ah Yay’ is set for release on April 23rd and Dreamers Stadium in May. How excited are you about these releases?

Excited? We get excited about the songs, the feel of the tune on an acoustic guitar when we start to play around with it to see how far we can stretch it without ever losing the initial feeling of the song.

All the stuff that happens when the song is completely new and you know it’s headed for the studio or the tape recorder, and it sits in your head until you finally get working on it with the band.

Those times are the exciting times, the not knowing if this song will lead to ten more. Getting the songs released on your album is dark water, you can’t tell the depth of it or if it’s hot or cold, but apprehension can be exciting too I suppose.
I know you previously recorded an album in the US and it failed to get released, that must have been tough on you as a band. What happened?

Well it was still me and my brother Denny, still our band, but the rest of the players were different. We wrote and owned all those songs and still do.

Nothing happened that we didn’t control, we walked away from a deal we didn’t feel could push the songs, simple as that. Then we came home and formed The Plea.

The Plea played the pub scenes in the UK and Ireland for many years now, has that been a good footing for the band?

We grew up playing in pubs and places like that, every Irish musician has to, there’s nowhere else to play. And every musician should. You’re playing 3 hour sets – we’ve done gigs in Ireland where we’ve played straight through until the dawn and beyond.

Those gigs will either add to your love of playing music or end it. There’s a few bands out there I’d like to see on a pub tour, they might even learn how to tune a guitar or come home pros at putting up ‘chicken wire’.

That would make for good reality TV. Imagine Justin Bieber backstage in a cloak-room doing vocal exercises, about to step onto a makeshift stage with 200 Harleys parked out front! I ‘d pay to see that show.

If you could grasp what inspires the music you make and really feel, that inspiration that ends up in songs that mean something to you and everyone that hears them, then it would be a very easy journey in music.

But it doesn’t come like that. It’s hard to place what inspires music as a creative entity, or whatever it is. Life inspires the songs and you write about whatever you’re living , maybe..

I really think great music inspires great music, the essence of it has to get passed on. I just hope it gets passed on to me.

Can you tell us a little about your experiences in America?

We started out playing covers over there with 2 acoustic guitars and we ended up playing and writing all our own stuff. These were pubs and small clubs we were playing, and for us to just play original music and not covers was unheard of in pubs back at home.

Americans are open to listening to something new right on the spot and when you understand and get comfortable with something like that, then as a musician you probably start to believe you are one.

America gave us that – I don’t think we would have really gotten that in the pubs at home. Unless I’d written ‘Freebird’! But I don’t think America could have given us the desire to play music that growing up in Ireland did, not a chance.

Will you be touring ‘The Dreamers Stadium’?

Yes, that’s the plan. We are already doing some gigs and it’s great, that’s the best part of it for us. You get to visit new places and play your tunes and see what people think, see some of the world and blend into some of it’s crazy places you’d never thought you would go or see, never mind play in. It’s quality.

What are the bands plans post single/album release, have you more songs in the works?

At the minute we are interested in this album, playing gigs and getting it out there. New songs are always there and we’re always writing and demoing some in the studio, but at the minute we’re focused on ‘The Dreamers Stadium’ and playing it to whoever wants to hear it.

What bands/performers are The Plea fans of?

The list is long and there’s a lot of different tastes within the band. But if we’re just jamming in a rehearsal then we might play something by Dylan or The Beatles. Denny’s got a habit these days of jumping on the piano and singing a verse or two of some of Dylan’s gospel type tunes, or one of Lennon’s solo tunes – anything screechy and full of life.

It’s always been the same with us though – The Doors, Dylan, The Rolling Stones, The Beatles, Oasis, just the greats….. Recently I’ve been listening to some Kasabian, Arcade Fire, Beady Eye and Noel Gallagher’s solo stuff, but that’s just me.

Who knows what the rest are listening to in the bath with their perfumed candles lit. It’s a very personal question…

How do the band relax when not gigging or writing?

In a bath with perfumed candles.

Well I know for certain it’s the Chinese ‘Year of the Dragon’ so who knows, it could be ‘the Year of ‘The Plea’ somewhere.

I like the sound of it though…..
The Plea are: Denny Doherty (Vocals, guitar, piano); Dermot Doherty (guitar); Paul Toland (bass); Gerry Strawbridge (Drums).
The band’s debut album Dreamers Stadium is released in May on Planet Function Records.