Check out our Q&A, answered by Ryan Wilson (Guitarist) from The Pigeon Detectives. Their new album “Up, Guards and At’Em” is out on April 4th. The single ‘Done in Secret”, is out on March 28th. 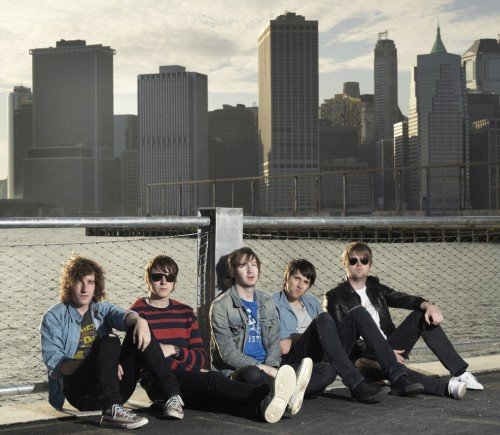 WHAT KIND OF MUSIC DO YOU MAKE / PLAY?
We make and play what we like to listen to ourselves, we wonâ€™t play or let a song go on an album if itâ€™s something we donâ€™t like or listen to if we werenâ€™t in the band.

WHERE ARE YOU FROM?
Leeds – UK

HOW DID YOU START AND WHEN?
We started by jamming The Beatles and Stone Roses songs in Oliâ€™s (guitarist) bedroom back in 2001, we then started writing our own songs. We played our first gig as a proper band in May 2004.

WHO ARE YOUR INFLUENCES IN THE MUSIC INDUSTRY?
I learnt to play the guitar listening to The Beatles and Oasis, so as a guitarist they were my first influences.

WHAT HAS BEEN THE HARDEST PART OF BEING IN THE MUSIC INDUSTRY FOR YOU?
Nothing is too hard to be fair, when on a huge tour especially in Europe or USA the travelling can be gruelling and really tiring that is the hardest thing in my opinion.

TELL US A BIT ABOUT YOUR EARLY DAYS AND HOW THEY DIFFER FROM NOW?
In the early days we all had full time jobs to keep as well as being in the band so things were really hard especially when we played gigs out of town, one time we played in Brighton and had to be Back in Leeds for 7am for work, they were hard days but fun. Now when we arenâ€™t touring we can spend our time writing and rehearsing rather than being stuck in an office.

WHAT WAS THE LAST GIG YOU PLAYED, WHAT DID YOU THINK OF IT?
The last gig we played was at Manchester MEN Arena supporting James, it was a good gig, the MEN Arena is a really great venue to play especially in front of 14000 people.

WHATâ€™S THE MOST SUCCESSFUL THING YOU GUYS HAVE DONE TO DATE?
Having an album going to number three in the charts and then going platinum, that was a great feeling, I have the disk hanging with pride in my house.

WHO HAS HELPED YOU THE MOST GET TO WHERE YOU ARE TODAY?
To start with ourselves, we were prepared to put all the hard work in back in the early days, if we didnâ€™t we wouldnâ€™t be where we are today. Thereâ€™s been a few bands that took us on tour (Kaiser Chiefs and Dirty Pretty Things) which got us playing in front of a lot of people which was great for us at that time.

WHATâ€™S COMING NEXT FOR YOU?
We are just about to do a full UK tour, which we are really looking forward to.

IS IT HARD BEING AN ARTIST IN TODAYâ€™S INDUSTRY?
No not really, we do what we do best which is writing good songs and playing brilliant gigs, we ignore whatâ€™s going on in the industry, if you believe all the industry bullshit youâ€™d throw your guitar in the bin before youâ€™ve even played a note.

HOW IMPORTANT IS THE INTERNET AND SOCIAL NETWORK SITES FOR YOUR SUCCESS?
At the moment theyâ€™re very important, as a new band itâ€™s a really easy way for people to read about you and listen to you. For us itâ€™s handy to let our fan base know what we are up to etc.

WHO WOULD YOU MOST LIKE TO COLLABORATE WITH IN THE INDUSTRY?
Itâ€™d be great to get collaborate with Lady Ga Ga, sheâ€™s pretty kooky so itâ€™d be an interesting concept a Brit band like us with a huge pop star.
Answers by Ryan Wilson (Guitarist)

The band have spent the past year writing and demoing in New York before recording in earnest in the Autumn of 2010,.

The entire experience has been a new one for the quintet from Leeds whose two previous albums – which have now sold in excess of half a million copies in the UK , were written and recorded on home turf and the first fruits of which will be the brand new single â€˜Done In Secretâ€™ .

Recorded at Brooklyn Recording Company with Justin Gerrish taking on production and mixing duties, the album â€˜UP,GUARDS AND AT â€˜EM!â€™â€™ will be released on 4th April through Dance To The Radio and will be available on vinyl, CD and digitally via all usual outlets.
www.thepigeondetectives.com