â€œThey use a long list of instruments (guitars, synths, horns, strings, glockenspiels, theremins, miscellaneous electronic squiggles and Nintendo bleeps), they cycle through things quickly, they keep the songs short (only one tops the four minute mark), and they never let a piece dragon too long before launching into something newâ€.Popmatters.com .

With ragged, furious distorted guitars at one end of the spectrum and the pure, luminescent tones of the Theremin at the other, the members of The Octopus Project mine a staggering variety of sounds in between (via strings, synthesizers, drums, glockenspiel, trombones, etc.), filling their songs with brilliant contrasting colors and cascading waves of sonic bliss. Although Josh Lambert, Yvonne Lambert and Toto Miranda each have their instrumental specialties, they spread ideas out on as many instruments as possible, each writing for and performing on any sound-maker they can find. 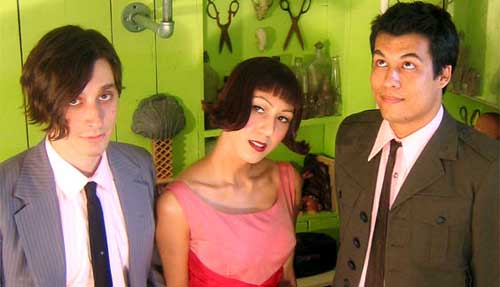 And if the instruments themselves weren’t enough, many sounds on the record were manipulated by the band to push them even further â€” inhuman drum breaks three layers deep piled over the original live drum track, a heavenly four-Theremin choir from a Wizard of Oz soundtrack that never existed, guitar parts mulched into bits and reassembled into a tiny Prince army.

While the band’s previous records were mainly self-produced, this time The Octopus Project wanted to achieve the perfect blend between high-end studio trickery and lo-fi home experimentation. Partially tracked to tape and partially to Pro Tools, Hello, Avalanche was recorded and co-produced by Ryan Hadlock (Blonde Redhead, The Gossip) at rural Bear Creek Studio outside Seattle in February, 2007, and mixed in various sessions by The Octopus Project, Hadlock and Erik Wofford (Explosions In The Sky).

Many sounds were taken from the band’s original demos â€” sequenced beats, edited loops, practice space recordings, etc. Parts of “Upmann” were recorded on a friend’s front porch (listeners will note the sounds of passing cars). As Yvonne has continued to gain notoriety for her expert Theremin skills, the band has developed its multi-tracked Theremin concept to its fullest extent â€” something the group first tried on last year’s collaborative album with Pittsburgh’s Black Moth Super Rainbow, The House of Apples and Eyeballs. These experiments yielded amazing results that can be heard on the album track “I Saw The Bright Shinies.”

In several years of nearly non-stop touring with an infectious live show that often incorporates lights, projections, balloons and band members that simply can’t stay in one place, The Octopus Project has developed an immense and loyal grassroots following, as evidenced by the band’s 30,000+ MySpace friends. Anyone wondering about The Octopus Project’s work ethic need only glance at the band’s Summer/Fall tour schedule. After headlining Brooklyn’s McCarren Park Pool Party in July, the band will kick-off three solid months of touring in August â€” first supporting Stereo Total, then Aesop Rock, followed by six weeks on their own headlining tour after the album’s official October 9th release. This round of touring also marks the inauguration of guitarist Ryan Figg â€” an addition certain to push the band’s live sound to the proverbial Next Level. 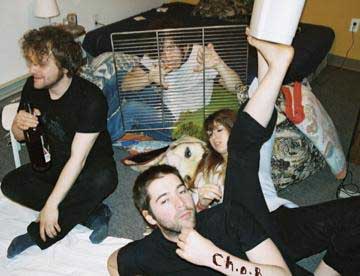 Duchess Says:
It was back in 2003 that four influential members of l’Ã‰glise des Perruches decided to collaborate on a music project. Comprised of A-Claude, Ismael, Phil, and Simon Says, Duchess Says delivers a punchy â€œmoog rockâ€ and live shows that are quasi legendary. They are a mish-mash of no-wave, new-wave, and punk, with a cinematic and artsy aesthetic. Their mandate is to not put any limitations on Rock.
myspace.com/duchesssays