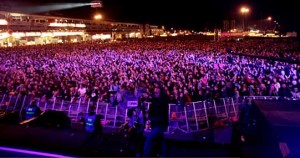 FANS HAVE THEIR SAY ON MOST POPULAR BANDS AT OXEGEN 2009 . OXEGEN 2010 DATES ANNOUNCED TODAY

It was a fabulous weekend for festival goers as once again OXEGEN provided some great memories for everyone who was there.

There is so much to see and do at OXEGEN but music remains at the very heart of the festival and boy, did we see some fantastic performances.

Today we can exclusively reveal the result of the on-line Fanâ€™s Poll as to who were your favourites over the summerâ€™s greatest weekend of music. Hereâ€™s the top 12 as voted by you, with most popular firstâ€¦


The Killers – Spaceman
by The-Killers
Blur – Song 2
by syup02

A pretty impressive list and to think there were over a hundred more artists playing the weekend!

It certainly whets the appetite for next year and on that very subject we have some exciting news. We can confirm today that OXEGEN 2010 will be taking place over the 9th, 10th and 11th July next year.

Itâ€™s the fans that make OXEGEN the success it is and the organisers would like to thank all of the fans for making it such a memorable weekend this year, bring on OXEGEN 2010.

For more information and updates on OXEGEN go to www.oxegen.ie