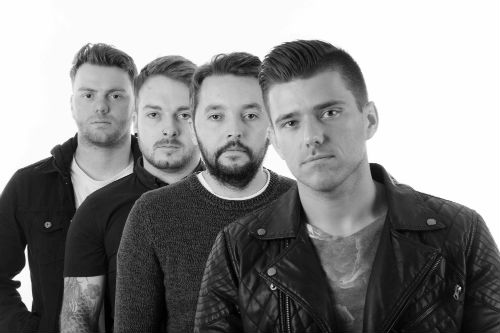 With South Wales four piece rock band The Marks Cartel – Matt Turner (vocals and guitar), Kristian Tabram (guitar and vocals), Rhodri Allcock (bassist and vocals) and Emyr Lewis (drums) – you won’t get any bells and whistles, but unashamed rock and roll at its very best.

The band’s debut single, ‘Curtain Call’, is released on 23rd February 2015 via Hamill Records. Here’s the rather interesting b-side track ‘Where Do I Go?’

Hello to The Marks Cartel how are you?

Exellent thank you! How the devil are you?

Good Thanks! For the readers who haven’t heard you before how would you describe your sound?

We sound like the result of a fight between Oasis and Arctic Monkeys, officiated by Royal Blood with Kasabian and Stereophonics spectating. The Arctic Monkeys won on points difference.

We all have our own influences and I think you can hear that in our music. The main ones being Kasabian, Arctic Monkeys, Oasis and Stereophonics. It’s awesome when we hear people compare our music to these bands but they can never pin point which one, which hopefully means we have found our own sound.

We were a band for 8 months before we actually settled on the name. We just wanted to concentrate on writing music and finding our sound before even thinking about it. But then we realised that we were going in to the studio in a few weeks and we were nowhere near agreeing on a name. One night we were texting different names and we were all watching Mr. Nice, the film about Howard Marks, and his “organisation” was called The Marks Cartel in court and i think we all had the same idea when we heard it.

Matt(singer) and Kristian(guitar) were mates. Rhodri(bass) didnt own a bass and Emyr(drums) had drums that he hadn’t played for a few years. Seemed like the perfect combination.

You have just released your b-side track ‘Where Do I Go?’ and will be releasing your official single in 2015. What are the theme contained in these tracks?

We write about things that we know and have experienced. It’s easier that way and we think people can relate to it.

We started a whatsapp group so it allows us to constantly throw in ideas. We’re always writing. Wether it be on our own at home, together in practice or one of us drunkenly singing nonsense in to the phone at 4am on a sunday morning. When we meet we just work on those ideas and turn them in to songs.

Anyone as long as they pay for the beers afterwards. But we’d settle for an apple and blackcurrant squash if it’s Kasabian or Arctic Monkeys

What can fans expect from The Marks Cartel live show?

What are your plans next year?

We’re heading in to the studio in February to finish our EP. But the main goals are to play festivals, get people to hear our music and take on anything and everything that is thrown at us. Maybe buy a PS4.