The Lost Brothers hail from Omagh and Navan. Mark Mccausland and Oisin Leech arenâ€™t actually brothers at all but from the way they talk about their music and the dreams they both have, they may as well be.

Their debut album received rave reviews in England and Ireland from the likes of NME, The Irish Times, Hot Press and Word Magazine comparing the sound to that of a more ragged Simon and Garfunkel. They start a 22 date winter tour in October 2009 which takes them around Scotland, Ireland and England.

The band are currently working on their second album with help from Bill Ryder Jones of the Coral. The Lost Brothers will play at Auntie Annies Attic on Friday December 11th 2009 with support from John Dâ€™Arcy. 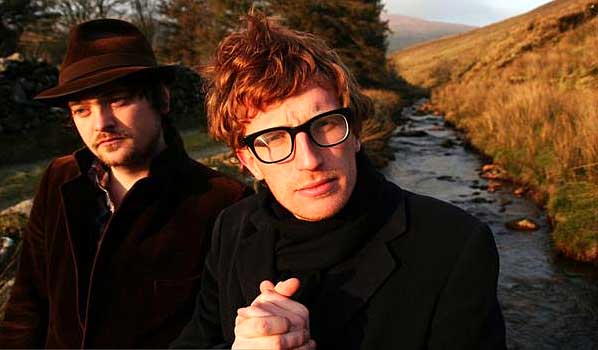 Perhaps separated at birth musically and with a long musical history behind both of them in the form of The Basement and the 747s, Mark and Oisin become more mesmerising as the minutes go byâ€¦â€¦with no expectations for what journey they are about to embark on except pure love for the instruments they play, for the songs they write, for the lyrics they sing. Itâ€™s the perfect union and yet so beautifully unplanned.

Having never played live as The Lost Brothers until one night in Portland, Oregon in 2008, roaming the streets and handing out hand-made tickets for a show they later put on. This is the way of the brothers â€“ everything happens exactly as they want to and exactly how it should. With such musical integrity and passion in everything they do, itâ€™s clear that all that matters to Mark and Oisin is that they truly enjoy every second of what they are doing.

Recording their debut album in Portland, Oregan in the attic of producer Mike Coykendall (M Ward, Bright Eyes, She and Him), they talk about the ghost they met in that very same house, the strange and inspirational atmosphere that they suddenly found themselves in and how their time in Portland was one of the most meaningful and fulfilling experiences they have ever had as musicians. They surrounded themselves with nothing but their dreamsâ€¦ in this quiet space they found themselves feeding this uninhibited musical focus. Starting their days at midday and going on well into the night, the time escaped them. For those three weeks, all time was lostâ€¦

Their dream was to always create something of beauty, integrity and entirely home made with nothing but their voices and instruments to carry them through.

Returning to their home, the journey starts along its path, with new perspectives and new musical experiences on their minds The Trails Of The Lonely (Parts I and III) was born. The album received rave reviews in England and Ireland from the likes of NME, The Irish Times, Hot Press and Word Magazine comparing the sound to that of a more ragged Simon and Garfunkel.

Since the release they have done shows with well respected American acts such as Justin Townes Earle, The Handsome Family, M Ward and Jolie Holland.

At the â€œEnd of the Roadâ€ festival Richard Hawley joined the band onstage for a song.

Lee Mavers, lead songer of the Laâ€™s,also joined the band on bass guitar over the summer and in October the band have been asked to open for Richard Hawley upon his request at the Olympia in Dublin as well as touring Ireland with Richmond Fontaine.

In 2009 the band were invited on radio shows with Steve Lamacq, Bob Harris and Janice Long. The Summer has been a successful run of festival slots from Glastonbury to the Electric Picnic.

Theyâ€™re already lined up to open for Oscar winners The Swell Season on their UK tour in January 2010. As well as starring as themselves in a feature film set in Poland, written by Derel Lister.

They start a 22 date winter tour in October 2009 which takes them around Scotland, Ireland and England.

Mark and Oisinâ€™s voices carry a feeling of both strength and vulnerability and it captures the very essence of the human spirit, the reconciliation of attachment and detachment and the strength thatâ€™s found through dark days. Perhaps an understanding of feeling something other than what is directly in front of us?

The band are currently working on their second album with help from Bill Ryder Jones of the Coral.