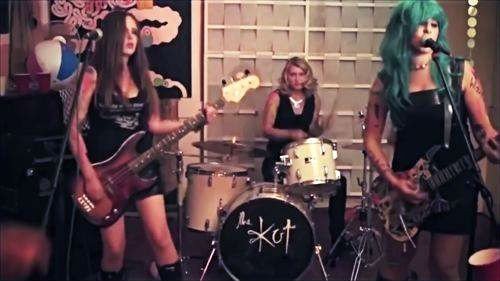 The Kut – Maha (Lead Vocals / Guitar), Alison (Bass / Vocals) and Amanda (Drums) – are a group of talented female musicians, who play a mix of dark indie and original rock…there’s no gimmick.

They won the public vote in MTV Brand New Unsigned Poll in 2013 and will release the dark and emotive single ‘No Trace’, Monday 20th January via Criminal Records.


The track is produced by James LeRock Loughrey (Skindred / White Zombie / Sonic Boom Six / My Vitriol) and is taken from their forthcoming ‘Makeup’ EP.

You have made the Top 20 Shortlist of the MTV Brand New Unsigned Category…How do you feel about it?

We are totally thrilled. It’s amazing that we came so high in the Polls and everyone around us really spurred us on. It was a great feeling that everyone was behind us, voting, posting our music, sharing what we do. It’s been a great time and we celebrated with a beer and a rehearsal. That same night though, someone broke into our studio, but we didn’t let it get to us and just got on with the partying. We are really thankful to everyone who made it
happen.

Can you talk a bit about ‘Closure’?

Closure was one of those tracks we loved in the live set. It’s quite a rocked up track although it doesn’t really sound as heavy in the recording.

It was all about how sometimes you are looking for an answer to something to come from outside, or for someone to tell you. The song Closure was a realisation or a message that you don’t need to wait for someone to tell you how it is, because essentially you know the answer in you and that is all the closure you need.

Aha, well although we’ve been told that our name means ‘minced meat’ or ‘the vaginas’ depending on the language, it was named after a car ride around London. There is a road called The Cut and it had a good ring to it. Being slightly obsessed with scissors since my mum gave me a gold scissor necklace as a 14 year old, the two merged and became the band name. We later heard that the Slits did an album called The Kut, so that meant we got to hear their tracks too after being told. They do a mean cover of ‘heard it on the grape vine’ 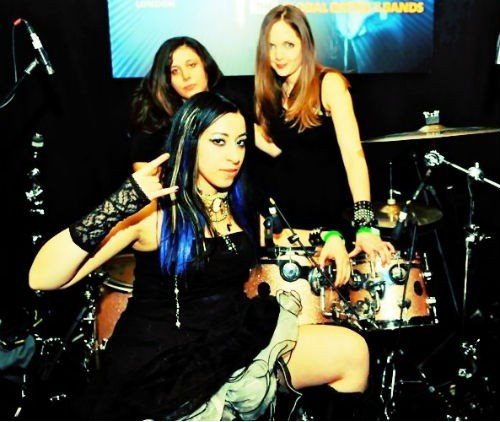 Initially the line up started as close friends playing, I know Alison from gigs where she played with her other band The Courtesy Kill (RIP) and we met Amanda as we shared a rehearsal space with her and her previous band Across The Latitudes. We all get on really well but it’s 100% the right line up now.

I think we are in a good space at the moment and it makes sense to play with the top musicians you can work with. It’s a great feeling to be proud of what each other can do while you are playing, it makes the dynamic of the band so much tighter and stronger.

It varies but I tend to write a lot of songs, if we have time around rehearsing the live set we do add in new ones too and everyone adds their take in on the arrangement. We’ve started writing more songs together now too, there are a couple we play live including ‘mario’ that will be on our EP. It’s great to be able to write tracks together too. We have similar music tastes and writing together means we are just writing twice as much as we would
otherwise.

What’s the best and worst thing about playing live?

Playing live is the best thing, I love to listen to music loud and we love playing our stuff to our supporters. I do worry I might be going deaf in the future. I don’t like earplugs, but I think the worst thing is that I might need to start using them or lose my hearing.

Ha ha, wow, you know, mine are a bit obscure. I want to play so many shows that when my life flashes before my eyes I can enjoy the memories. Also, on the sly I’d like to have our music in a Levi’s advert, and do an Unplugged set for MTV. I wonder if we are any closer to either of these goals right now? 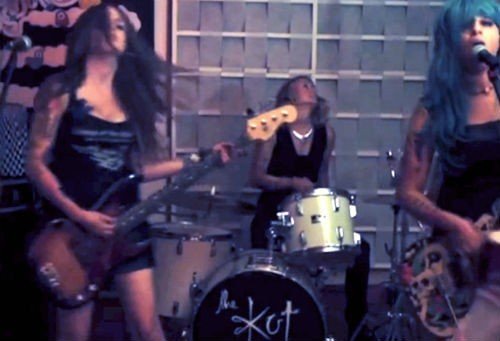 Every day is an influence, the person that bumps into you on the street or smiles at you in the queue. I love all styles of music, but mainly rock. We love similar bands, are influenced by grunge and the whole 90s scene, L7, Deftones, Smashing Pumpkins, Nirvana, Faith No More, NIN, Placebo, My Chemical Romance. I wouldn’t say we sound like any of them but for a discerning ear they are easy enough to spot.

It’s been challenging at the moment with the studio having no power and break ins. I would have to say, the lack of money in records has to be the biggest challenge we face to just keep making music, videos and promoting what we do.

We’ve had so much support from friends and family. It wouldn’t be possible to keep going without those people in our lives.

We’ve just finished recording our forthcoming EP with James Lerock Loughrey. He’s a great producer and we were already fans of his work with Skindred, White Zombie and My Vitriol before we got to work with him. That’s in the mix stage right now and we are bringing the next video, ‘no trace’ out in the lead up to the release.

The EP will be released early next year. It’s all go at the moment. The video for ‘no trace’ is out now and It was produced by Robert O’Meara, who is also a long term friend. After that, who knows…