The Killers have confirmed they will perform at The O2, Dublin Friday 20 February and The Odyssey Arena, Belfast Saturday 21 February 2009.
TicketsÂ  go on sale this Friday 10 October 2008 at 9am. The Killers brand new single â€˜Humanâ€™ which is currently out on digital release is taken from their 4th album â€˜Day and Ageâ€™ which is released: November 24 2008. 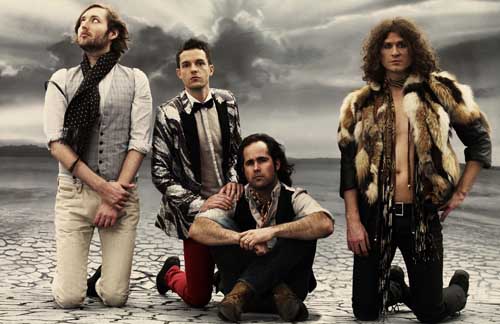 The group last played to over 30,000 Irish fans at Marlay Park in August along with a small exclusive warm up show in The Academy which was heralded as the â€˜Gig of the Yearâ€™ by critics and fans alike.
The Killers at The O2, Dublin Friday 20 February
The Odyssey Arena, Belfast Saturday 21 February 2009.
Tickets from â‚¬50.80 for Dublin and Â£38 for BelfastÂ  go on sale this Friday 10 October 2008 at 9am.
Limit of 6 tickets per person.
Under 16â€™s must be accompanied by a parent/guardian.