The Killers will bring the bright lights of Vegas to Boucher Road Playing Fields on Thursday 21st August when they headline Tennent’s Vital 2014. Joining them on the bill will be the hottest breakthrough act of the past year – very special guests, Bastille. Tickets on sale from 9am on Monday 31st March.

Sarah Shimmons, Beer Marketing Manager for Tennent’s NI, said: “We’re very excited to announce the first two artists for Tennent’s Vital 2014 today. The Killers are undoubtedly one of the biggest bands in the world with a global reputation for their amazing live shows. They’ll be joined on the bill by Bastille, who have enjoyed massive breakthrough success in the past year and are one of the most exciting new acts around right now.

“Tennent’s Vital brings top international and homegrown talent to the heart of Belfast and since its return in 2011, it has well and truly cemented its place as a highlight of Northern Ireland’s music calendar. We’re delighted that our partners at MCD have once again secured some incredible acts for the Tennent’s Vital bill – it’s already shaping up to be a brilliant event and we can’t wait to see you there!” 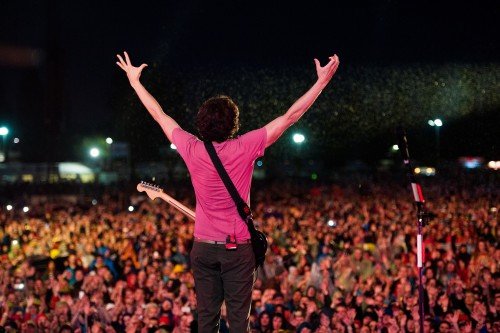 Tennent’s Vital 2013 saw a top line-up including Kings of Leon, Snow Patrol, Avicii, The Vaccines and Tinie Tempah play to tens of thousands of music fans at Boucher Road Playing Fields, and this year’s event will once again bring some of the best musical talent on the planet to Belfast for an unforgettable festival experience.

Fans can get their hands on tickets for Thursday 21st August, headlined by The Killers and featuring very special guests Bastille, when they go on sale on Monday 31st March at 9am from ticketmaster.ie. Fans of Tennent’s Vital on Facebook can get exclusive priority access to the Tennent’s Vital pre-sale from Saturday 29th March – join facebook.com/tennentsvital to find out how to reserve your ticket before they go on sale to the general public.