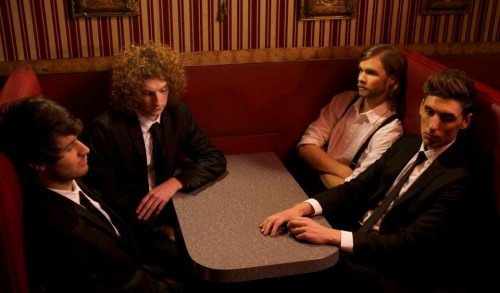 What can you tell us about new EP release ‘Songs For Sinners’?

The EP is simply 4 songs that act as a bridge between our previous releases and our forthcoming album. The writing and production is a step up, but it’s just a taste of what’s to come.

Where did the bands name come from?

It came from the Dutch. They named a tidal straight in New York “Kill Van Kull” which we found out through reading about Bruce Springsteen.

How would you pitch the Kill Van Kulls to a potential new fan?

We let the music do the talking, it sounds a lot better than a pitch. I’m sure there’s other music that you could compare us to, but that’s for the fans’ and critics to do.

You have a very healthy and growing fan base, are they predominantly Manchester based, or is it further afield?

We have support from all over the world actually, perhaps too far stretched! We like to appeal to all sorts of cultures and walks of life though, and we look forward to building on that.

I hear you are ‘hands on’ in your approach to your music, what does that entail?

We take a very “do it yourself” approach to the music. We record all of our music either in our own rehearsal space or in our homes, and that comes with limitations but we find ways around those and learn a lot from it.

The music is never taken out of our control. It doesn’t cost a lot of money too, which is a good practice. I think, you don’t have to pay for a good sound.

You record in your own studio too, is that easier than renting a space etc?

Our own studio is rented, but that doesn’t detract from the ease we have in recording, rehearsing and writing songs. It’s much easier to have a long-term space than having a short-term space to rehearse at.

Everything. It’s like, what inspires you to talk about something? Thoughts just come and you talk about them. Similarly music just comes into your head and you play it.

The list of music we like is endless, but movies, photos, friends and family are all just as inspiring.

Can you describe your writing process, is it a group thing?

It depends. Sometimes one of us comes in with a close to complete song, and we craft it into perfection together. Sometimes we can just make something up together from scratch.

Other times it starts with a small idea like a guitar riff being brought in and then we take it from there.

We’re just in the middle of recording our album, which is going great. It should be out before the end of the year.

We’ve also got quite a few shows booked which will continue to be announced as the year goes on. Other than that it’s more song writing and paying our dues.

You also remix songs, how did that come about?

We occasionally get offers to remix a song. So we just see which one of us makes the best remix and then release it under our name.

It’s a fun break from the usual stuff we do.
How did the band form?

I believe Milton responded to an advert Gareth had out looking for a guitarist. Milton asked long time friend Walton to join and play bass.

I filled in on drums for a band that were aquatinted with Walton and they put in a word for me to try out for the band. We all got on immediately and it worked.

Do you feel social media is a big boost for the industry, do you embrace it as marketing tool?

Yeah social media is a great tool. It has brought about a big change in music. Musicians can have direct contact with fans now and that can be a great marketing tool.