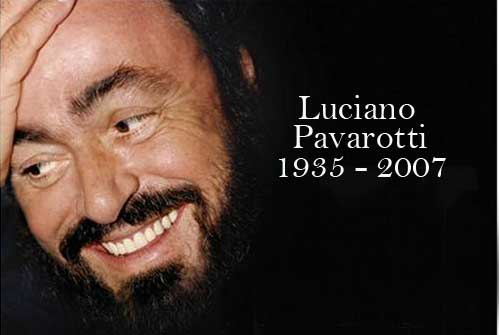 “I think a life in music is a life beautifully spent and this is what I devoted my life to”. Luciano Pavarotti (1935 – 2007)
Luciano Pavarotti, the most beloved and celebrated tenor since Caruso and one of the few opera singers to crossover fame as a popular superstar, died this morning in his hometown Modena. He was 71.

His fellow tenor, Placido Domingo, said from his home in Los Angeles that he would not forget Mr Pavarotti’s sense of humour or wonderful voice.
“I always admired the God-given glory of his voice – that unmistakable special timbre from the bottom up to the very top of the tenor range,” he said.
“I also loved his wonderful sense of humour and on several occasions of our concerts with Jose Carreras – the so-called Three Tenors concerts – we had trouble remembering that we were giving a concert before a paying audience, because we had so much fun between ourselves.”
The mayor of Modena, Giorgio Pighi, immediately announced that the city’s theatre should be named after Mr Pavarotti.
“A great artist and a good man has left us,” he said.
“Luciano Pavarotti has made Modena shine in the world.”
“It is possible that there will not be another Pavarotti,” wrote La Repubblica, an Italian newspaper.
“His name will be remembered among the greatest in the history of opera, a living symbol of a tradition that has deep roots, but is finding it more and more difficult to find its champions.”