James Taylor will be playing a live acoustic set accompanied by Larry Goldings a one man band who plays piano, organ, synth, harmonium and melodica. 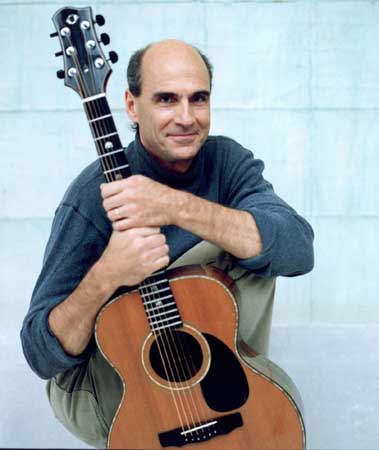 Together they serve up a full menu of Taylors work over the past 40 years which is accompanied by a full slide and film show to encapsulate the full James Taylor experience.
James Taylor describes his one man band tour â€œOf course its grand working with the big band â€“ such great playersâ€¦.But performing these songs in their original, stripped down form in small halls is like going to the well for water. It reconnects me to the music and puts me back in touch with the audience.â€â€œThe 59 year old singer songwriter presented his one man band show to Glasgow with such effortless charm that it was like you were sitting around the fireside at home with a bunch of old friends. But the ease with which he put it all across belied the rigorous attention to detail and sheer craft that went into the making of this delightful show.â€ â€œJames Taylor sang & played with a touch that was nothing short of perfection.â€ The Times

James Taylorâ€™s music embodies the art of songwriting in its most fundamental form. He has been at it for decades: transforming introspective meditations into lyrics, melodies and harmonies that comfort and reassure the listener with the sense that these sometimes painful, sometimes celebratory moments are a part of life, shared by us all.

In 1971, James was featured on the cover of TIME magazine, who heralded him as the harbinger of ‘the singer/songwriter era”. Today, the quintessential singer/songwriter has seen that era crossover into the 21st century. James currently resides in The Berkshires with his wife, Caroline and their sons Henry and Rufus.

For more information on James Taylor please see his official website
jamestaylor.com
James Taylor
Live at the Waterfront Hall, Belfast â€“ 31st March â€˜08
Tickets will go on sale Next Friday 18th January at 9am
Tickets are Â£38 and will go on sale from Ticketmaster outlets nationwide, booking line no.0818 719 300 and online at ticketmaster.ie
aikenpromotions.com