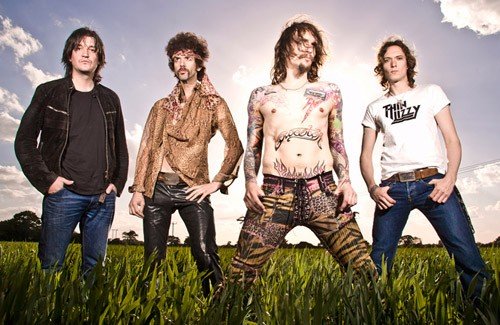 Following a string of triumphant warm-up shows (the roof of Shepherd’s Bush Empire reportedly eventually found floating in Chelsea Harbour in the early hours of the morning), and the band’s full-blown main stage ‘comeback’ show at this year’s Download festival, The Darkness make their return to touring with an extensive UK & Ireland run in November 2011. This is the original line-up’s first tour since 2005, and the largest selection of British & Irish venues the band has performed in on one tour since they were still riding around in a clapped-out transit van.

When the band released their debut album ‘Permission To Land’ in 2003 they exploded into the public’s consciousness with a fresh and exciting sound, look and attitude.

Playing every show as if they were headlining Wembley Stadium they embraced the classic rock sounds of the 70’s and 80’s and gave it a unique updated sound for the new millennium.

Countless chart hits followed, 3 Brit Awards, millions of albums sales and sold out tours (including a headline slot at Ireland’s Oxegen festival) before they called it a day in 2006.

After Download this weekend the band will play several European festivals before returning to concentrate on finishing their third album … do hold your breath!