To say there is hype surrounding the latest instalment of the Batman franchise is an understatement.Before I’ve even ordered my popcorn I’ve already read various news stories about the late Heath Ledger’s portrayal of The Joker, with some of his co-stars tipping him for a posthumous Oscar nomination.
As a fan of Heath already, I tried to have an open mind but I have to say the hype is dead on. The Joker is psychotic, scary, bold, menacing and intense and Ledger’s performance is flawless. 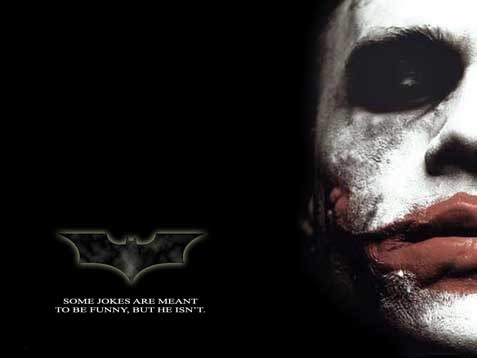 In fact watching the film it’s difficult to believe it actually is Ledger under all that make-up. His voice, mannerisms and demeanour are all The Joker.
And while Heath Ledger blew me away, Christian Bale, who plays Bruce Wayne aka Batman, is not to be overlooked. For me he is everything Batman should be, and I couldn’t imagine any other actor playing the dual role.

The film picks up where Batman Begins left off, the elusive Joker is robbing banks across Gotham while Batman is attempting to take down the Mob once and for all.

Running scared of the Caped Crusader, organised crime bosses are trying to avoid jail time while contending with The Joker, who proposes they take out Batman.

The Dark Knight focuses very much on what kind of hero Gotham needs and how Batman fits into that ideal. Keeping his identity hidden is key to Batman’s mission but to protect that secret sacrifices are made that shake Bruce Wayne to the core.

Championing all that is good in Gotham is DA Harvey Dent, played by Aaron Eckhart. He is the hero Gotham needs to bring the city through the dark times but he too is conflicted about how to fight injustice.

Dent’s internal struggles, the outcast Joker and Bruce’s choices as Batman leave them isolated from the rest of Gotham yet some how linked to each other.

The dynamics of Bruce, Dent and The Joker as well as Batman’s relationship with Lieutenant Gordon, played by the brilliant Gary Oldman, make this much more than a comic book film.

It’s a complex tale of good versus evil, and knowing what’s right.

The Dark Knight definitely gets my vote and if Heath Ledger’s performance goes unrecognised by the industry it will be a travesty.
thedarkknight.warnerbros.com