By Cathy Black
THE Cottage is a relentless dark comedy set in a remote part of the countryside. It’s the story of a bungled kidnapping that turns into a living nightmare as the four central characters cross paths with a psychopathic farmer and all hell breaks loose. It sounds promising, except this genre bleeder is neither funny nor scary. 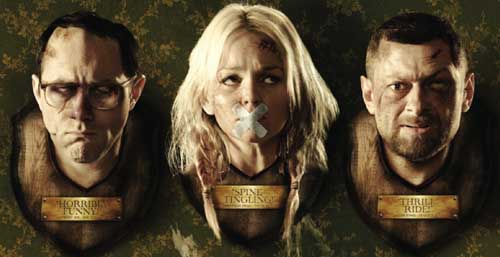 The weak script by writer/director Paul Andrew Williams was woefully acted. Andy Serkis shouted a lot, maybe to compensate for the dire dialogue, while Jennifer Ellsion showed more cleavage than acting ability.But unfortunately they are not the worst culprits. Everytime Reece Shearsmith (League of Gentlemen) appeared on screen I literally cringed. I felt like I was watching a school play thanks to his over-pronounced words and amateurish presence. A jaunty, nerve-grating score by Laura Rossi embodies the air of forced, empty jokiness.

THE COTTAGE cert 18 is out this Friday March 14.