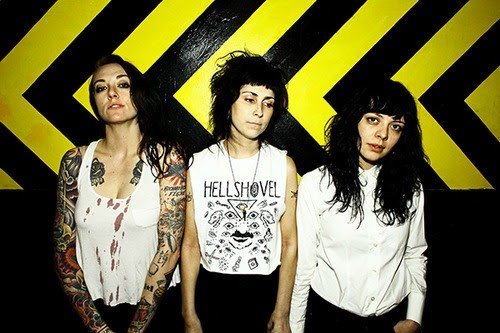 With their strong and urgent tracks “Follow Me” and “Springfield Cannonball”, we get a taste of their upcoming album, “Suck My Shirt” (out March 18th on Suicide Squeeze Records).

We picked the name The Coathangers because its ballsy yet not too controversial. We arent pro-abortion or anything like that but we are pro-do the hell what you want with your life, its kitschy but still meaningful to us.

I dont think we were necessarily inspired to make music together at first as much as we were just curious to see what we could create. Once the band got going however and our material began meaning more to us we were inspired by events in our own personal lives as well as past events that we wanted to express via the band. 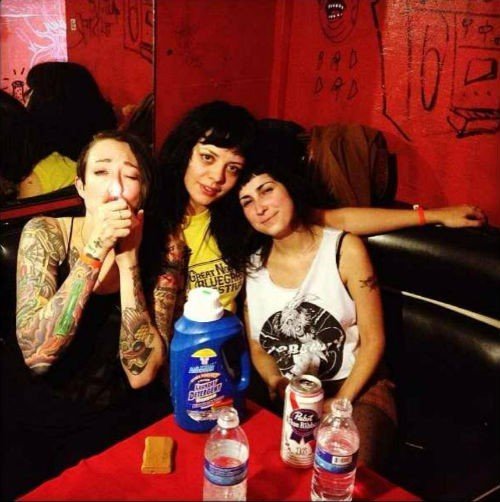 You were a band before you were musicians….you started out in Atlanta as an excuse to hang out. Can you tell us how has your music evolved since you first began playing music together?

Its evolved greatly!!! Like you said we were a band before we really knew exactly what we were doing so obviously learning how to really play our instruments and how to figure out song structure and figuring out how to express our own personal feelings/thoughts in a not-too-specific way lyrically, etc. has lent itself to our evolution.

Also we’ve come a long way as related to touring; when we first began it was little week/2 week long tours on the east coast whereas now we have 2 month long stints (usually 3 times a year) throughout the year as well as extending tours to the UK and other parts of Europe, Canada, and Mexico.

Tell us something we should know about ‘Suck My Shirt’?

I would say out of everything we have written and recorded so far, this one really is strong and we are most proud of what we put on it. Basically what im saying is, it rules.

Why did you repressed Larceny & Old Lace LP on a pink vinyl/fluorescent pink and green?

Nothing in particular, we just liked the way that shit looks, plus its fun to mix it up a bit. 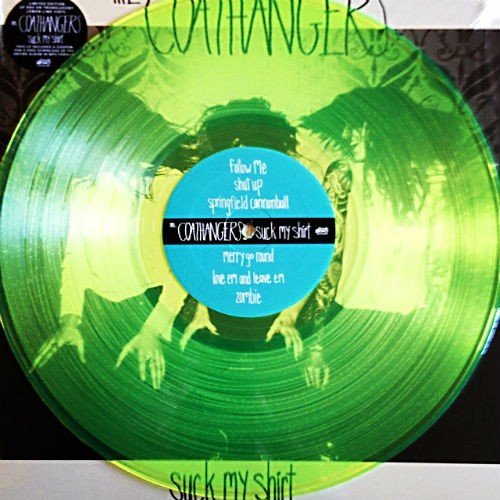 We are heading out March 10th to SXSW (stopping in NOLA and such on the way out there) and we are playing 7 shows in the 3 days we are there and its gonna be bruuuutal (but in a good way)! We love SXSW because theres new bands to check out, old bands to revisit, lots of good times, friends and trouble to get into.

The shows we play there always seem wild as hell… everyone there is there to PARTY, so yea if you like to have a good time then you should be there. After that we head out west to meet up with The Black Lips for a two and a half week stint, then we meet up with our friends Audacity in Tucson AZ for a three and a half long stint ending in Atlanta. Very stoked on all this!

You toured across North America and Europe countless times. What has been the hardest part of being on tour?

Ok, so although tour is difficult in the sense that you’re constantly driving, not really eating, not really sleeping, etc its our favorite thing to do so its hard to complain… Finding a shower or a place to sleep after the show is difficult sometimes, as well as splitting a 24 hour drive between 2 people in a day and a half, or loading our equipment up 3 flights of stairs, but yah no complaints here, we’re just happy we get to tour as much as we do.

Our family and friends and employers (who let us leave for months at a time then let us return to our jobs) and David from Suicide Squeeze Records have all been very supportive and extremely key to us getting to where we are, but (not to sound like a dick) but also us three in the band. Each one of us has helped the other, as far as pushing each other musically, emotionally, etc. to really see how far we can go with it.

Not a damn thang. Everything is as it should be for us right now.

This band is who were are, its the only thing we all really wanna do and we love it more than anything. This is our life.

Who knows?! hopefully more touring and more writing etc., we would love to get back to Europe for sure!