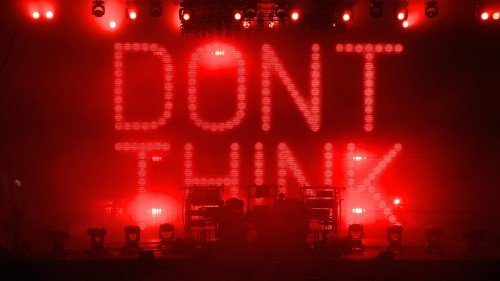 Filmed using 20 cameras at the band’s 2011 headline show at Japan’s Fuji Rock Festival, Don’t Think was conceived to capture the Chemical Brothers’ renowned fusion of visual and audio elements to give a fan’s perspective of the show.

The soundtrack, which was mixed by the Chemical Brothers, makes use of the improved panning, sound localization, and enhanced definition provided by Dolby Surround 7.1’s eight channels and four surround zones to realise the creative team’s vision for the film.

“After 18 years of working on the Chemical Brothers’ live show, we have finally captured it on film. You could almost say it’s 18 years in the making,” said Adam Smith. “I wanted to capture what it is like to experience the show from right in the middle of the crowd, as well as showing and combining the visuals featured in the show with the footage we captured on one night, to see how the music and visuals emotionally affect and connect with the audience.

“Mixing Don’t Think in Dolby Surround 7.1 certainly helped us to achieve this like never before.”

With more than 45 feature films released or set to be released in the format to date and 3,400 cinema screens worldwide supporting the technology, cinemagoers are already experiencing the realism and immersive experience offered by Dolby Surround 7.1.

Once it is released on 1 February 2012, Don’t Think will be shown on more than 500 screens in 20 countries.
dontthinkmovie.com