The Cat Empire, one of Australiaâ€™s biggest bands make their way to Belfast this October to play The Spring & Airbrake.

Since 2001 these guys have amassed a huge worldwide following – selling multi-platinum albums, celebrating number 1 debuts, winning a whole load of awards, and performing on some of the worldâ€™s biggest entertainment shows like Letterman and Leno. 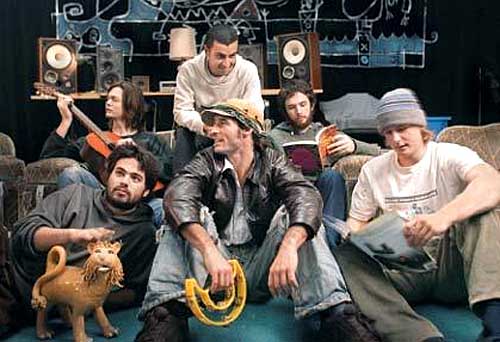 They have played over 800 shows, including headlining festivals all over the world, and they are still not slowing down, with a new album slated for release in 2010. THE CAT EMPIREâ€™S music defies definition. They only thing we can tell you it is that it is incredibly infectious, undeniably uplifting and definitely danceable.

â€œAn Australian singing in French about an American state with a Jamaican rhythm trackâ€. The Cat Empire is a band which has been able to harness disparate musical elements, making them like no other band on the planet. The most impressive part is that they can combine every sound they can think up, and still deliver an upbeat, festive atmosphere each time they hit the stage.

When it comes to driving a band forward, Angus says having a workaholic in the shape of his co-lead singer Felix Riebl makes it easy for the rest of the band. Felix is a driven individual who comes from a musical family. His uncle is the head violinist in the Vienna Philharmonic, one of many musical Rieblâ€™s. Sister Rosie studies classical piano, and younger brother Max is one of Australiaâ€™s emerging counter tenors. 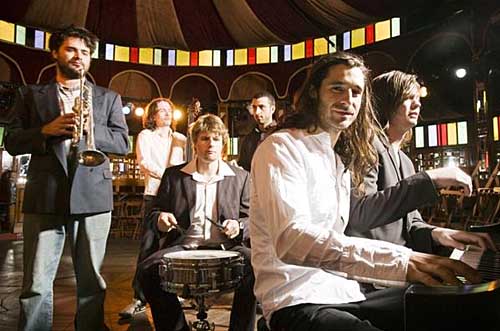 Pianist Ollie McGill can be relied on to see the dark side and play devilâ€™s advocate, intentionally or not. He says it takes at least two years before he can stand to listen to their recordings. Eventually he hears what the rest of the band does and is pleased with the results. Like Felix, Ollie, who began playing the family baby grand at four, is surrounded by inspiring people. His brother is responsible for the White clothing label, while his sister founded fashion label Shukuhatchi. His artist father created the distinctive Cat Empire logo.

Ryan grew up on Victoriaâ€™s Mornington Peninsula and is as famous for his amusing tour diary of life on the road and his daily coffee blog which tracks every coffee he ever drinks, as he is for his bass playing. Will comes from a family of music teachers, builders and great cooks.

Education runs through Harryâ€™s family too. Not only is his father a Professor at Ballarat University but his aunt is Australiaâ€™s one time most famous student – Kylie Mole. Harryâ€™s trumpet playing grandfather can still be seen in the audience when his grandson is performing.

This personal chemistry is as important as the musical chemistry that has served the band so well. Rather than despair because of the differences between the players, The Cat Empire has been able to make worthwhile art from them from the beginning. One look at a the grainy footage shot in front of a few hundred friends at Melbourneâ€™s Commercial Club in their first show as a six piece in 2001 and it is instantly recognisable as The Cat Empire. The haircuts and clothes may have changed but the energy is unmistakeable.

Some members say that they knew they were on the right path this very night, which was a couple of weeks after DJ Jumps crossed paths with the band. (Jumps joined the Empire by being in the right place at the right time. He was visiting a friend when Felix called and offered the friend the scratch gig in the new band. The friend declined, and handed the phone to the Mumbai born Jumps who took up the offer). Others will pick a different point in time, with the common held belief that when they held a residency – most famously at such Melbourne venues as The Saint and The Prince Of Wales – they could see the numbers multiply each time they played. It is the oldest known successful music business model, simply offer something audiences canâ€™t get anywhere else and play well at every opportunity.

What they all agree on is that they had enough encouragement from their ever growing audiences to continue to follow their musical dreams and trust that it would find a home in peopleâ€™s hearts. In short an audience found them, they didnâ€™t have to follow fad and fashion to find an audience.

Almost immediately they became the band to add to any festival bill. Whether it be a wine festival in Western Australia, a comedy festival in Edinburgh, or any of the massive travelling caravans that criss-cross the world every summer, The Cat Empire enhance the experience. They have the enviable knack of not appearing to fit anywhere (read the opening sentence again and marvel at how they do it without seeming distant and academic) but absolutely fitting in everywhere.

And crucially, the songs that Felix and Harry were writing for the band (Hello, Days Like These, The Chariot, Sly The Car Song, Two Shoes, No Longer There, So Many Nights and Fishies) and the way the band performed them, meant they could quickly transcend the small clubs where they started and win over big festival crowds. Having travelled many miles, these songs remain in great shape. But then they should shouldnâ€™t they, with all the work outs they get?

How do they pull it off? From the first moments on stage the groove is ferocious, the brass is sassy. The trumpet and keyboard feel like theyâ€™re blasting in your living room; Felixâ€™s vocal is, well, sly, but it also swoops and falls and hyper-ventilates and pretty much leads you right into Harryâ€™s next song, whose island flavor and sing-along hook make it clear that this is a ride to remember.

Fact is, they are far more complex than they sound, if you want to break what they do down to the basics. But tempting as that is, the best way to appreciate The Cat Empire is to do what fans have been doing all over the world for 9 years; crank it up. Make it loud. Let it rip. Save the analysis for later. Dance!

As of 2010 The Cat Empire have played almost 800 shows. They played 26 in their first year. That figure nearly tripled in 2002 and since then, apart from 2008 when they took a well earned rest, they have averaged more than 100 shows a year in over 160 cities worldwide. In fact 40 per cent of their shows have been outside Australiaâ€™s borders. They have entertained 150,000 people at the Montreal Jazz Festival and pulled 10,000 under their own name to the Sidney Myer Music Bowl and Brisbane River Stage. In total itâ€™s estimated theyâ€™ve played before a total of over 5 million people.

That is The Cat Empireâ€™s journey so far. It shows what can happen – every night – when you do it right. They dared dream beyond fun times, fellowship and free beer and wanted to make sure if the dice did roll their way they would be ready to make the most of all opportunities. Hard work can appear very similar to luck to the untrained eye.
www.thecatempire.com
CDC LEISURE PROUDLY PRESENTS
THE CAT EMPIRE
+ SUPPORT
SPRING & AIRBRAKE
SATURDAY 30TH OCTOBER 2010
Â£17.50 + booking fee / 8pm
TICKET DETAILS
In person: From 22 Ticketmaster outlets province wide (Including Easons) / Katy Dalyâ€™s Bar
24hr hotlines: Tel: (NI) 0844 277 44 55 (ROI) 0818 719 300
Buy online: www.cdcleisure.com