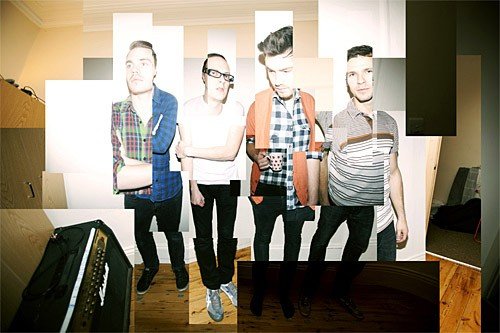 Irish band The Cast of Cheers have just released their eagerly anticipated single ‘Family’. Fame was fortunate enough to catch up with the band and chat about this release and much more, including their upcoming UK Tour.
Get the free download of The Cast of Cheers – Family (Royal Scams Remix) here

We’ve known each other for years, we hung around in some of the same circles and have played together in quite a few bands with each other so to be completely vague I’d say through music and some time during the mid nineties.

As for us getting together as The Cast of Cheers… Conor, Neil and Kev had been playing together in a math rock band for a few years called ABAM. They were awesome but unfortunately broke up in the summer of 2009. I was working close to Conor’s job at the time and we’d meet for lunch quite a bit.

Conor told me he had been working on some new songs and asked if I’d play bass to flesh them out a bit so we started jamming together and were soon joined by Kev on drums. We were recording within a month (Oct 2009) and by the time we got around to playing live we realised another guitarist would ease what Conor was doing (currently, looping multiple guitars live AND singing).

Neil, Conor’s brother was our first choice, made perfect sense. Neil’s first jam with us was 2 weeks before our first ever gig as The Cast of Cheers. The lead up to the gig really mirrored the history of the band and the pace that was set at the start. Jump in, head first!

We take influence from all over, there’s so many bands we could mention. We’re all huge fans of bands like The Police, Battles and Queens of the Stone Age, to name but a few. They’ve been quite a big influence and source of inspiration for us.

Adebisi Shank, an Irish band, are another huge inspiration, especially for their live show. T he energy they put into their gigs is phenomenal. They whip the crowd into such a frenzy with their stage antics you can’t help but get caught up in it!

What you think about the indie scene in London and UK?

It seems to be thriving. There’s a lot of exciting bands coming out right now. We’ve played quite a few shows over here and seen quite a few too and at nearly every one there’s been a band that made us go “wow”.

Recently we played a show with a band called Race Horses who were jaw dropping live. Real presence and emotion in their live show. Quite inspiring to see small bands play “stadium” worthy sets.

Doing interviews! Only kidding! Probably back when we all had day jobs and had to work through tours. Very little sleep during those days.

I’d say the biggest change is that we’re now 100% focused on the band. In the early days we all had jobs and the band was worked around our hours. Now, we all live in a house together in London and being the band is what we do 24hrs!

Madame Jojo’s in Soho. Quirky little venue and bar which houses cabaret shows. Lots of red velvet! Great night, we got to meet and play with a lovely welsh band Race Horses.

Have you any forthcoming gigs?

Yes! We’re about to embark on our first ever UK tour with another band called Theme Park, they’re awesome! We can’t wait to get on the road and have nothing to do for 2 weeks but play gigs!

Probably being nominated for a Choice Music Prize in Ireland. It’s sort of a best album of the year type deal for Irish bands only. We were nominated with so many other great Irish bands and we all got to play live together at the event. Pretty spectacular evening!

Our manager Mick Roe has been invaluable to us. Ireland and UK blogs have been amazing to us, they really helped us get off the ground in the first place. Our label School Boy Error have been fantastic to us, great to work with and they let the music be what it is.

Two Door Cinema Club have been amazing to us, they’ve pulled us in on support for some of their bigger UK shows which were just unreal experiences to be a part of.

Immediate future… UK Tour followed by some European dates followed by a support slot with the amazing Blood Red Shoes on their upcoming UK tour! Really excited about that tour! GIGS, GIGS, GIGS!

I think trying to make a living from being in a band is always going to be hard regardless of what the industry is going through.

The industry is changing for certain and it’s about adapting with the change but there’s a lot of ways to work within it. I think having a presence online and in social media is a big part of that adaptation.

Hugely important! Have you been on the internet?! It’s amazing! I honestly don’t know how The Beatles ever got anywhere without facebook! Kidding of course, but it’s such a big part of everyone’s lives these days.

It’s where I go to watch music videos and check what a band are up to. It strips a virtual barrier or two back between yourselves and your fans.

Paul Daniels and Debbie McGee… we have this suedo magic music light show thing in the works. It’s currently at the drawing board stage but we’re dreaming BIG!
John – The Cast of Cheers
thecastofcheers.com
facebook.com/thecastofcheers