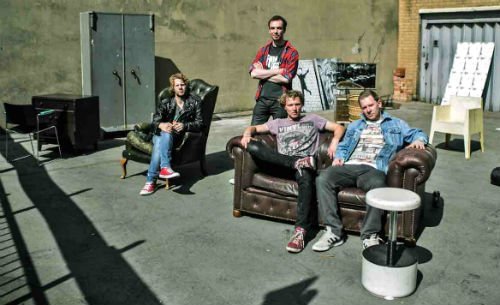 Hello to The Capture Effect how are you?

Getting festive right now. Then looking forward to a lot of gigging in the New Year.

Hard hitting rock guitars spliced with fuzzy synths, beats and samples. All the songs are narrative at heart though.

Our name was a lucky accident. We were rehearsing and one of our amps starting picking up a live radio news broadcast. The strange phenomenon is called ‘The Capture Effect’.

Stuart, Andy and I are old school friends who’ve played music together over the years in various guises. We met Adam down at a local pub in Camden, we got chatting about our love of Radiohead and then asked him to audition for us.

You have just released your download track ‘London’s Burning’ and will be releasing your debut EP in 2015. What are the themes contained in your music?

‘London’s Burning’ itself is about the August 2011 riots in London and studies the menace and seductiveness of a mob mentality.

Then there’s some stories about relationships, heartbreak, the media and politics.

On this record I demo’d most of the material in my bedroom before bringing it to the group to tear apart and put back together again. Writing now is a bit more organic where we jam things out at our studio and demo it as a group.

What can fans expect from The Capture Effect live show?

What are your plans next year?

We’re organising a tour to promote our debut EP ‘Frequencies’ due out in March. So lots of gigging, there’s some support slots to be announced and then its looking forward to the Summer festivals.