The son of the legendary Bob Marley, Ky-Mani Pens His Personal, Controversial Memoir, Dear Dad: “Where’s The Family In Our Family, Today?” The Story the Marley Family Apparently Doesn’t Want You to Know. 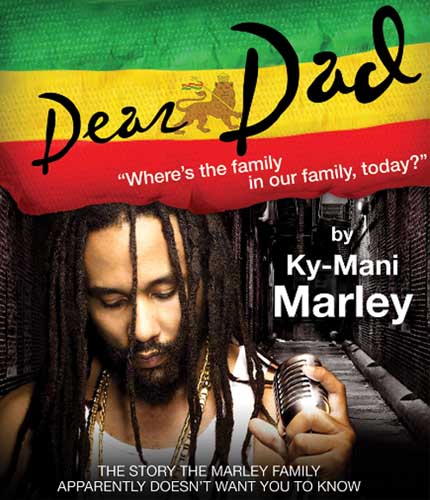 Published to coincide with Bob Marley’s birthday, Dear Dad: “Where’s The Family in Our Family, Today?” The Story the Marley Family Apparently Doesn’t Want You to Know , by world-renowned and Grammy-nominated recording and performing artist, Ky-Mani Marley–Bob Marley’s tenth child–is a compelling biographical account of a son who was locked out of his iconic father’s shelter after his death, and forced to survive poverty and run-ins with the street-predators of Miami’s violent ghetto.

Ky-Mani grew up estranged from his siblings, and also cut out of any financial gain by Marley’s widow and manager of the Marley Estate. This compelling narrative chronicles young Ky-Mani’s gritty ascent from a bullet-riddled life to the world stages he now commands as a musical artist–a platform he has made on his own.

Ky-Mani performs songs of redemption around the world like his famous father did, but has also lived to tell his personal redemptive story.

According to Fortune magazine, the Bob Marley estate generates as much as $600 million, and by 2012, it is expected to generate in excess of $1 Billion–making Bob Marley the richest deceased celebrity. With all the wealth, the acclaim and the legacy, why would the Marley family try to censor a true life story written by of one of Bob Marley’s sons–who many say is the son who best resembles his father’s extraordinary talent?

In fact, the Marley family is so outraged over the publishing of this memoir they lodged a campaign of intimidation over Ky-Mani Marley as the author of this book, unless the thus far forsaken and ostracized son of Bob Marley rewrites the truth and omits the sometimes harsh realities of his being excluded from the Marley family’s affairs and events, and of intentionally being denied the love and attention enjoyed by the other children. They also demand that he confirm and showcase such distortions during his interviews and the highly awaited book tour.

Ky-Mani’s publisher, Dr. Farrah Gray, defends the memoir and the author’s right to disclose and describe the story of his life, even if it exposes situations and episodes the Marley estate prefers not to reveal. Gray’s position is based on his personal commitment to the truth and is also grounded in law. Legal authorities confirm the publisher’s right to pursue a claim of ‘tortious interference’ –a civil action that could possibly deem the Marley estate liable for damages caused by its threats to Marley’s son. Injunctive relief is also being considered.

“Family politics can be a straight bitch. It can flow deep. And it can cut deep. You have to understand what I’m calling family politics. It was family politics that gave me all of the growing-up experiences I have detailed in this book,” said Ky-Mani Marley.

Dear Dad: “Where’s The Family in Our Family, Today?” The Story the Marley Family Apparently Doesn’t Want You to Know is Available now on Amazon and in book stores to coincide with Bob Marley’s 65th birthday February 6, 2010.
kymani-marley.com