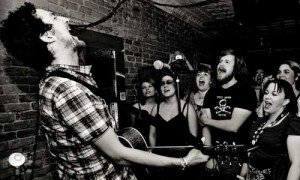 For three long and often lonely years of life on the road, plying a brand of honest and passionate folk/punk, Frank Turner continued to rise to prominence with an ever increasing following.

But it was in the sweaty climes of the Lock Up Stage at Reading and Leeds 2008 that his solo career really started to take off. Inside the packed out tents, heaving with adoring fans and intrigued passers-by, Frank led the congregation in a mass sing-a-long; a stirring set that not only sparked the interest of the British mainstream but resonated unassumingly across the pond as a wealth of American punk bands watched approvingly from the sidelines.

Frankâ€™s brand of folk songwriting, catchy melodies and punk passion soon reached the ears of the CEO of US independent label Epitaph Records, Bad Religionâ€™s legendary guitarist: Brett Gurewitz. Excited by what he had heard and seen when Frank headlined LAâ€™s notorious Viper Rooms in March, Gurewitz got in contact and soon enough plans were formulated and a worldwide deal was inked.


â€œFrank Turnerâ€™s music is a revelation to me,â€ says Gurewitz. â€œI canâ€™t stop listening to it. Itâ€™s a real privilege to get out there and help Xtra Mile spread the Frank Turner gospel.â€

Epitaph is the perfect home for Frank. With its fiercely independent spirit, rich in punk and hardcore history it is also home to the song-writing talents of Nick Cave and Tom Waits on sister label Anti; mirroring Frankâ€™s cross-over appeal of punk ethics and strong song-writing abilities. Inspired by the likes of Bad Religion as a kid, this really is a dream come true for Frank.

So with this exciting plot in place the year ahead is looking pretty good. His third studio album, â€˜Poetry Of The Deedâ€™, released worldwide in September, sees Frank venture in a more rock direction recruiting his outstanding band for the recording process. Performing live has always been at the very heart of the Frank Turner experience and whilst heâ€™s still writing all the songs, they will be recorded live to help bring that experience to the album.

Grammy nominated producer Alex Newport â€“ who has previously worked with Death Cab For Cutie, At The Drive-In, Two Gallants â€“ is on production duties after contacting Frank directly asking if they could work together. Coinciding nicely with the release are tours in America and Europe as well as the massive UK headline tour in October, where having previously supported The Gaslight Anthem at Londonâ€™s Shepherdâ€™s Bush Empire, he will return triumphantly to headline for the last night of the tour, and judging by what happened last time, itâ€™ll be another defining moment in this story of one beardy man and his acoustic guitar.

The best is yet to come.