It was around this time in the last two years when announcements about who was coming to play at The Beach Party in Portrush were made, so in response to the many queries received, the promoters have publicly clarified their plans for this year, and next. We can confirm that the award winning event is taking a break this year.
Whist many will be disappointed by this, the promoters hope that no-one gets too down about it, as The Beach Party will be back in 2009 (subject to license)!

Many factors contributed to the decisions made for 2008, and core to that was the non availability of a top quality headlining artist on the specific dates available for the event. 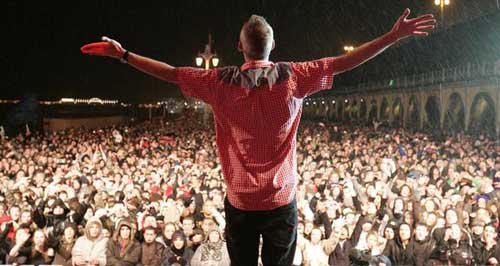 Promoter Gary McGuigan clarified this saying: â€œWe have very high standards in relation to the acts that we book for this prestige event. This year unfortunately there was a lack of something appropriate in the short pre summer season window in which it is possible for us to utilise the East Strand site. So rather than lower those standards we have decided to take a break until next year.â€

He added that â€œIt is in a way opportune, as the logistics of putting everything together in such a location is a big commitment on our part, and indeed for all those who work with us locally to assist the smooth operation of the event.â€

He went on to say â€œThe placement of the event within the heart of a seaside community at this period of the year requires the significant time and good will of so many in the area, and places demands on the local community, so we are aware that giving everyone some space when these outside factors contribute is a good thing all roundâ€

Mr McGuigan continued â€œWe are thankful to all concerned for their efforts and patience, and indeed acceptance and welcome over the past couple of years in Portrush. But we came to the conclusion that rather than putting on an event with which we were not fully happy it was better that the site and everyone who helped to make it a success took a deserved break this yearâ€

He concluded: â€œWe look forward to next year, and working once more with everyone in the Coleraine Borough Council area to present another instalment of this great day out by the sea. Be assured that artists of the calibre of previous headliners Fatboy Slim and Basement Jaxx will once again grace the North Antrim Coast.â€